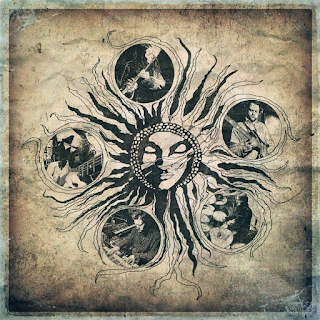 This 2-CD set contains an incredible performance that Anglagard did two years ago in Japan at the Club Citta as they were sharing the bill with The Crimson ProjeKCt. When you listen to the CDs, you can imagine yourself being at the club, and just being in awe and jaw-dropped momentum with Anglagard mesmerizing performance that will send shivers and goosebumps throughout your whole body. They aren’t doing this for the money, they are doing this to show love and support for the music and the fans.

I remember hearing their music few milky-way’s ago (not the candy bar) on both United in Prog with Tony Romero and Prog Rock Deep Cuts with Ian Beabout a couple of times. And I knew I had to check them out. They were my cups of coffee with the essence of King Crimson, the Peter Gabriel-era of Genesis, and Bo Hansson. It was sinister, dark, and like something had come out of a horror score that just took me by surprise from the moment I bought all three of their albums and knowing they got a lot of ideas in their head.

But let’s get to the music. The live album entitled, Prog Pa Svenska: Live in Japan, is brilliant and hypnotic at the same time. And the moment you put the CDs on, you can close your eyes and see them perform in all of their glory. I love Ana Holmgren’s wind instruments that she uses on the tracks. I could feel touches of David Jackson (VDGG), Ray Thomas (Moody Blues), and a dosage of John Coltrane at times whilst Johan Brand brings his Bass to his touch of Squire’s beauty on his Rickenbacker.

Not to mention Tord Lindman’s guitar shining through the Hackett frontier. While the tracks are from their three albums, there’s also a new track entitled, Introvertus Fugu, Part 1. This is perhaps one of the scariest introductions to start the album off. Cavernous sounds between piano, wind, and guitar. It has a jazzier introduction before the rocket ignites of ascending chaos between the forces of Manfred Mann’s Chapter Three, King Crimson and The Least We Can Do is Wave to Each Other-era of Van Der Graaf Generator.

I love the guitar and the mellotron parts that just come right at you and Anna’s wild sax solo improvisation just nails you to the stomach as if a punch is ready to hit at any moment. Jordok in which it was the opening track from their debut album Hybris back 23 years ago, is still a knock-out. The unexpected time changes, classical and medieval symphonic prog at its best while Langtans Klocka from their comeback in 2012’s Viljans Oga has a Mike Oldfield flavor to it and a Jazzier essence thrown in that gives Ann a chance to shine on her flute solo.

But what I love about that track, it has that wonderful dystopian gypsy jazz with a mixture of Maurice Ravel’s Bolero thrown into the mix as Anglagard descend into chaotic beauty that will give you nightmares at the very end with a sinister finale. This is my fourth, fifth, or seventh time listening to their live album. I was on the edge of my seat from start to finish. And I hope they will do more in the years to come.


So if you want to show support for bands like Anglagard, buy Prog Pa Svenska: Live in Japan to get you on the bandwagon.
Posted by znathanson at 8:53 PM