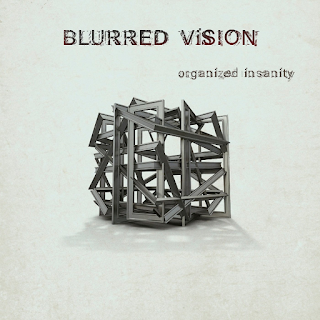 Among endorsements including Roger Waters of Pink Floyd who have brought them international acclaim when they re-written the Floyd’s classic of Another Brick in the Wall with Hey Ayatollah, Leave them Kids Alone back in 2010 in which the group Blurred Vision formed, it shows how much potential they will have and bring into their musical landscapes for the trio. Carrying the aspects of Prog, Pop, Psych, and Indie Rock, Blurred Vision considers the Osley brothers. Sohl on Bass and Lead Vocalist/Guitarist, Sepp. And drummer Ben Riley to complete the three-piece trio.

Their debut album released this year entitled Organized Insanity reveals the stories of the modern world on the controversial issues between politics, religion, war, and what is happening in the music industry. And when you have Terry Brown who has worked with Rush, FM, Klaatu, Max Webster, and The Who to name a few, it is a perfect combination. And for me, this is musical landscape that the Canadian trio have brought to the fore-run.

I was in awe and just completely blown away of the structures of not just the Prog and Psych-Indie Rock flavor to it, but how they managed to pull it together and creating the score of living in the world that we, the listener, are living in. And how the new generation are facing in the world right now and making the first chapter on how to survive and pushing it through.

The thumping-guitar rhythm and drums and electronic vibrations come kicking in to start a revolution to stop the killings that gives it an excellent message with the melodic-pop touch to it with the opener, No More War. Both Sohl and Sepp were born in Iran. And the lyrics capture the atmosphere of what is going on today and hopefully to bring peace and understanding.

Rollin’ On shows their love of the sound of Roger Waters lyrics with a haunting tone with Electric Keyboards, bluesy melodies, and not to mention the reminiscent of The Pros and Cons of Hitch-hiking while the intense rhythm goes into a climbing tune for Promise. Since I’ve mentioned the message of peace earlier, the acoustic beatle-sque ballad of Dear John will have you in tears.

It’s a message again in the opening track, but to hope and pray for a new day of Peace. I love the Beatle touches in the styles of Sgt. Pepper and Abbey Road and Blurred Vision know the message of hope will happen one of these days when the time is right and the time is now. And the middle-eastern touches of the eerie moments come swarming in with The Keeper.

You can imagine yourself walking on a tightrope and not knowing if someone is going to cut it or falling off, you have to hang on for dear life to make it to the next level and the song itself captures the dangers and the essence of an expectation is coming towards it. Tonight is such a wonderful song. At first begins with a melodic ballad but it goes into a lively feel in the styles of Porcupine Tree’s The Incident-era that would make Steven Wilson proud in the styles of Drawing the Line.


Blurred Vision really shows a lot of potential in their sound and the Prog-Psych-Indie pop flavors go really well on their debut. I can’t wait to hear more of their music in the years to come and I think that Organized Insanity is for me, a warm welcome for the debut of a band that is going to shine through.
Posted by znathanson at 4:59 PM