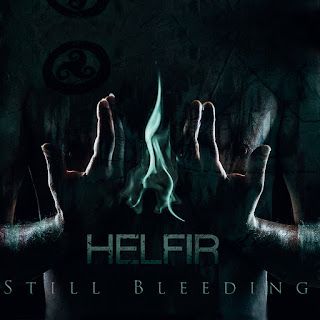 This is almost an unexpected record for me when I first heard it. Luca Mazzotta, who has performed in various bands along with the talent he has brought along with the classical studies in his roots. Helfir, when I first heard the title, it had a dystopian vibe, and a darker title that fits Luca’s solo project. He has complete control and free rein on what he wants to do. So if you have a soft spot for Porcupine Tree, Pink Floyd, and Anathema, this might be worth exploring.

Still Bleeding is Helfir’s debut album released this year on the My Kingdom Music label and it’s very interesting in the darker and ominous sounds with melancholic and ambient/atmospheric music. At times it’s almost as if it was recorded in the late ‘70s/early ‘80s of the electronic music and having the acoustic sounds thrown in to see where Luca is going with Helfir.

There are nine compositions on here that Luca wrote. And when he sings, the expression is a raw and powerful vibration whenever he sings as the music takes him into those darker areas. The moment the notes that he goes into, you could feel his pain and inside his heart. And the compositions are; hard, sad, eruptive, and structured.

Portrait of a Son is an electronic/futuristic acoustic ballad that begins with an ambient introduction that has a reminiscent of Anathema as Luca himself carries and walks into the footsteps of Daniel Cavanagh’s lyrics while Alone carries an emotional weight and the lyrics being with one’s own. And the guitar itself carries an echoing resemblance of the Floyd sound.

Meanwhile, My Blood has this gothic sound that has an early ‘80s structure as if Katatonia could have recorded this thirty five years ago with the synths, drums done by Angelo Buccolieri and carrying the post-rock movement with the moody clean guitars and the gentle voices to give it a spooky feel. Dresses of Pain goes into more of the guitar lines between the heavy electrical format followed by the clean acoustic midsections that the two elements have a waltz in the two areas.

Night & Deceit closes the album with a thunderous yet heavy thumping roar in the rhythm and the lead section almost sounding like a haunting version of Haken. And it’s a very strong punch between the prog, dark, and post-metal momentum to close the album off. This took a few good listens to get into and I was impressed by Luca’s compositions of what he had written.


And I hope he gets a chance to take those aspects of Prog, Post-Rock, Metal, and Goth by pushing all of his might to see where he would take Helfir next into. My Kingdom Music has done it again. Recommended for fans who admire; Anathema, Pink Floyd, and Katatonia, Luca Mazzotta and Helfir’s Still Bleeding is a journey into the darker and heavier worlds that he will take you on.
Posted by znathanson at 7:53 PM