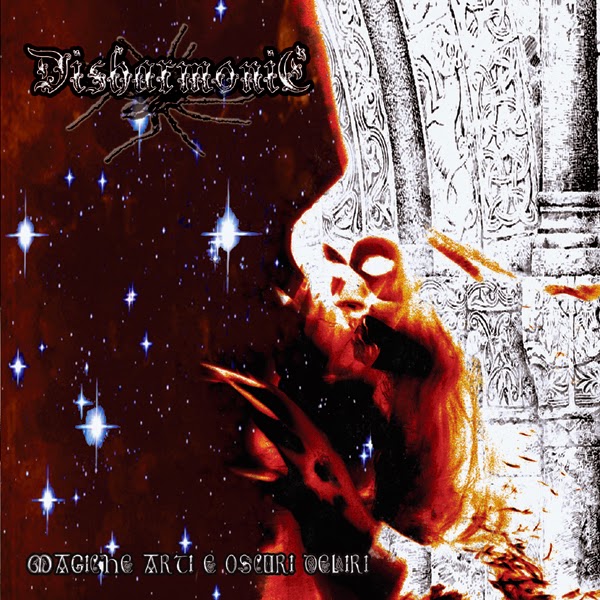 There’s always a darker side of the Black and Doom Metal genre and the two of them are mixed well together to go into a colder much haunting beat inside the cavernous place. And from the moment I listened to Disharmonic’s Magiche Arti E Oscuri Deliri, in which the title translates to Magical Arts and Dark Delusions, it is for me, one of the scariest albums I’ve listened to from start to finish.

The band formed eighteen years ago in Italy by drummer Lord Daniel Omungus and guitarist Sir Robert Baal. The concept for Disharmonic is to bring in something that was really sulphurous. Disharmonic released two albums, two demos, and one EP. And their new album released this year, is a combination and reminiscent of Paul Chain, Goblin, Devil Doll, and Jacula.

It is almost as if it’s a score for a horror film that both Dario Argento and Alejandro Jodorowsky worked together and almost wished they used a score like this that is off the wall, sinister, and avant-garde. It features some snarling spoken-word dialogue along with operatic, and calming vocals on the album that is almost speaking through at times through an echoplex by giving it a terrifying view of what is to come in a darker way.

Effects filling the halls as if you as a listener are inside an insane asylum filled with the nightmares and terrors that realizing that there’s no hope of turning back to getting out alive. The music itself fits the concept very well. The Guitars give it the heavy, dark, psych and doomy atmosphere that resembles Tony Iommi and Mercyful Fate coming at you like a terrifying beast ready to rein terror.

You could imagine the essence of Black Sabbath’s first sole self-titled debut album along with Antonius Rex music flowing in parts of the compositions that almost could have been a part of the sessions of Tardo Pede in Magiam Versus and Disharmonic are capturing those vibes to show the touches of Rex’s sound as a tribute and homage. While this was my introduction to the music of Disharmonic, this wasn’t an easy album to listen to from beginning, middle, and end.


However, this is a very interesting and yet terrifying album I’ve listened to. And Disharmonic have really shown a lot of the ideas in their sound, that they really gave me a chill and shiver down my spine. And since listening to the album around my third or fourth time, I have to admit this will really give you goose bumps from the moment you put it on and knowing they have done something ominous, raw, and powerful to give you a nightmare for the rest of eternity.
Posted by znathanson at 3:24 PM