MoeTar - Entropy of the Century 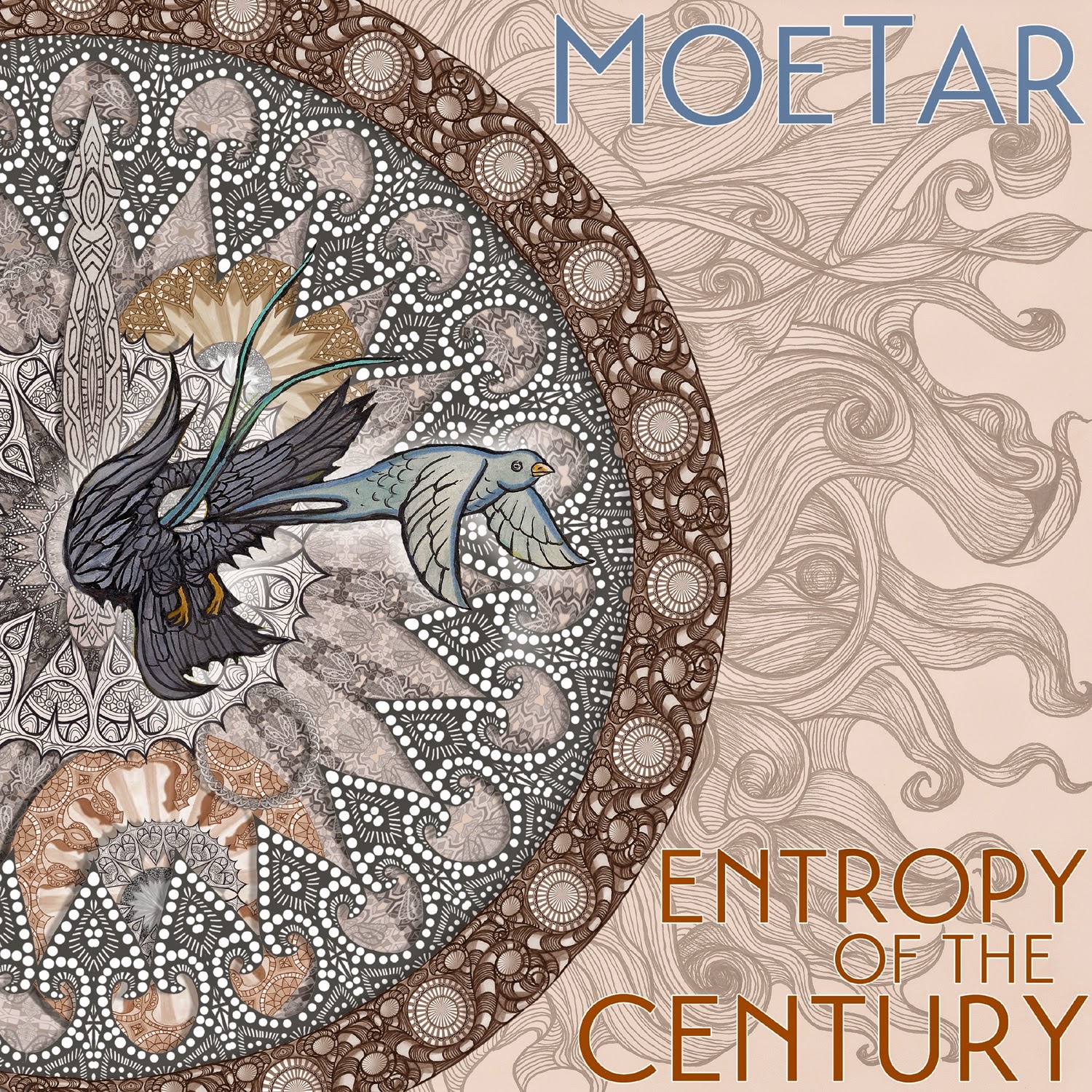 2014 so far has been quite an amazing year of new releases from bands like; Knifeworld, Hedvig Mollestad Trio, Univers Zero, and The Microscopic Septet, to name a few, and you can always imagine what is going to happen next in the Progressive Rock scene in the years to come in the future. And one of the most amazing bands that completely blew me away from the Bay Area is MoeTar and they are back this year with their follow up to From These Small Seeds with Entropy of the Century.

Throughout all the sounds of Psychedelic, Progressive, and Avant-Art-Pop, has really come around since their formation six years ago. MoeTar has received word-of-mouth and recognition. Including opening for Avant-Prog group, Sleepytime Gorilla Museum back in 2011 at the Burning Man Decompression Festival and everything is starting to cook very well with the ingredients they have. It’s hard to describe about their music, but is fun, catchy, difficult time changes that comes out of nowhere on of the compositions, and they have a great time having a blast and let the listener to enjoy and sink into the music.

Throughout all of the 12 compositions that have been written by bassist Tarik Ragab except for one by keyboardist Matt Lebofsky of miRthkon. Opener, Dystopian Fiction, begins with Lebofsky’s star-like intro on the keyboards that is in the style of Supertramp’s Crime of the Century-era as Moorea comes in with her vocals and Matthew Charles Heulitt playing the melody on his Guitar before the Drums come kicking in as the spaceship begins for it's liftoff. Then there is the title track.

I almost cried during this second piece, because it isn’t just beautiful, but moving and stirring that is embracing to join us with a groove and yet, an emotional adventure. As Moorea’s voice just hits you so strong that you almost couldn’t let go of the album, because she sings so touching that it has a dreamlike welcoming into the city as the band places the instruments into shape for the audience to come in and start their new chapter in this new universe.

The creaking yet thumping sounds between Heulitt and Ragab on Regression to the Mean has this eerie/spooky introduction before getting into the reminiscent of Bowie’s Heroes-era that reminded me at times Sons of the Silent Age and the lyrics have an Orwell meets Ayn Rand vibe as Moorea sings “By decree 2+2 is 3/Non-believers dead after curfew/All unwanted freaks shall conform to guidelines right there on the chalkboard/Stand up straight and hate all those not like us on the same team.” Meanwhile, Welcome the Solar Flares, has an ascending crescendo that has a symphonic value as Friday Night Dreams goes into the dance halls as it kindles Half Past Four’s Good Things, but with a laid-back feel as if you are tap-dancing on the sidewalk.

Letting Go of Life has emotional structures on the views on all the damage you have done to yourself and everything has come crashing down, you have to make some sacrifices before you fall towards your doom as they lay down the totalitarian environment on how the machines taking over the city along with no longer being a human and turning into a robot along with going through the puzzle with a Zappa vibe to it on Raze the Maze, the ideas of being used in the corruption of feeding dreams on  the Confectioner’s Curse,  and the lyrics on We Machines, hits you on how the humans can be foolish to be machines; “I do no longer need my arms or either of my legs/Some motorized mechanism will do for me instead/These new eyes replace my old worn out brand new face.”

The piano introduction done by Matt Lebofsky with his composition, Benefits gives Ragab a chance for Matt to write some lyrics and the response is a jazzy and gentle melody that gives MoeTar relaxation as it goes into a ¾ time signature thanks to the guitar solo by Heulitt who just goes not just all the frets, but seeing where his instrument might take him. The dooming metal keyboard intro just comes out of nowhere on Where the Truth Lies and at first it sounds like something out of the sessions of Jethro Tull’s A Passion Play before going into the Crimson-like sounds that Heulitt does to pay tribute to Robert Fripp and then go into the Avant-Pop territory.

We head off into the highway with The Unknowable. It has this soft lullaby for their mother’s singing to their child to sleep and hoping that everything will be fine and knowing that this city was really worth it and how you can understand that this isn’t what you expected and how is it impossible to be of one’s unreal world. I have listened now to Entropy of the Century around nine times now and I have to say that this one of the finest follow-ups that the band has unleashed who can give the listener and the audience an unexpected astonishing adventure.


It is a crowning achievement for MoeTar to bring something remarkable, startling, and mind-boggling which is going to have a lot of competition on the race for the best albums of this year.

Here is the band performing Regression to the Mean.
https://www.youtube.com/watch?v=7Td0kSVXoI0&feature=youtu.be
Posted by znathanson at 9:24 PM