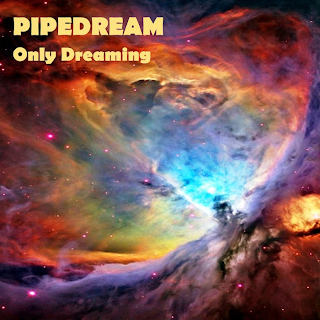 The band was called Pipedream and their debut album, Only Dreaming, which was done in about six days and the songs were recorded as demo sessions between 1992 and 1993, is a laid-back, exhilarating, mind-boggling debut they’ve unleashed. They had been around since 1991 before they called it a day in 1994.

It's a shame that the quartet weren't going anywhere, but this album of the sessions, shows they were ahead of their time. The band consisted of Rob Ryan on Bass, Martyn Wimbury on Drums, Ade Emsley (1992) and David Yates (1993) on Guitar, and David Leverno on Lead Vocals. While there are 11 tracks on here, the shifts, keeps the flow going to keep you ready for six centerpieces.

Big Tall Man ushers heavy doom metallic guitar riffs, calming drum beats as Yates does his homage to Tony Iommi’s driven lines to have the Sabbath sound while Rob comes up with some cool bass work while Leverno shouts and mellows on the vocals on the doom-waltz groove that is out of this world. Opener, My Last Day is a blistering Space Rock adventure that starts the album off with a bang into the outer limits.

Begins with this Eloy-like guitar lines that Ade does as an homage to Frank Bornemann before the full-driven rocking out explosion kicks into full gear as David goes through his Jim Morrison and Eddie Vedder voice to get you ready for the journey as the guitar players help him out. You can imagine a shrieking nightmarish ‘70s punch that is completely unexpected to make you jump.

The heavy acid rock comes in handy that is a knockout on Feel. It’s a trip visiting the late ‘60s but with a heavy metallic twist as Ade goes into a thrilling yet haunting riffs on his guitar to give it a sinister feel before he goes into this wonderful homage to May Blitz’s For Madmen Only at the very end to make it a thrashing and speeding sound to close the track up with a big bang!

The heavy jazz-funk rock wah-wah roar, gives Pipedream a chance to lay back and get into a mellowing groove on Concept.  Rob comes up with this cool bass line and the Hendrix-like style guitar sounds is a tribute to the master as David sings and speaks at the same time about how life is messed up as Yates, Martyn and Rob help him out to get the funky vibes that is beautiful while David helps them get the vibes flowing for the three of them.

Crazy Way’s blues and at times gothic punky vibe are Rob and Martyn’s time to shine as Rob begins this Devo-sque bass line while Martyn chills on the drums and more of the guitars heavy rocking workout exercise done by Ade while Flow Free goes into the Prog structures to close the album off. It starts off with an acoustic guitar flowing up into the clouds as it adds a cosmic voyage back into the heavier moments that makes it the perfect trip to head back home to earth thanks to Ade's guitar lines to knock it out of the ball park.

Only Dreaming is almost a lost and hidden treasure and feels as if it was recorded back in the late '70s/early '80s and recorded by an obscure band that were a hit-and-miss, but Pipedream could have been the real thing in England. This is a must listen to album and it will give the band the recognition they really deserve.
Posted by znathanson at 9:41 PM