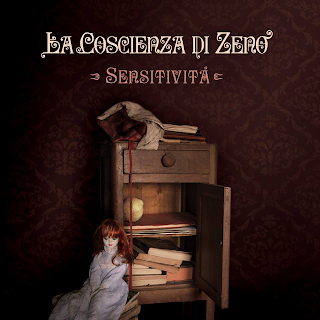 For a band that captures the essence of RPI (Rock Progresivo Italiano) and English Prog, the sound of La Coscienza Di Zeno (which is named after the book by Italo Svevo) is right up in your alley. Formed in 2007 in their hometown in Genoa, the band has been around for six years and they have shown a lot of encouragement and are receiving word-of-mouth in the Prog community. Following in the footsteps of; Genesis, PFM, Le Orme, King Crimson, and early Yes rolled up in their sleeves, their next album which is a follow up to their sole self-titled debut album is soon going to be one of the most astonishing and exhilarating albums to come out this year in 2013.

Sensitivita, released under the Fading Records label which is a part of AltrOck, is a breathtaking experience from start to finish and they have come full circle with this album. And since this is my introduction to the band’s music, I’m soon going to become a huge fan of their music in the Italian Prog resurrection and giving it a huge jolt like no other. Opener, La Citta Di Dite begins with a piano concerto done by Luca Scherani who does this Rick Wakeman-like style for an introduction before the band goes into high gear.

The instruments go through a swirling excitement before singer Alessio Calandriello comes in with his vocal arrangements and Davide Serpico’s mind-boggling guitar work representing the sounds of David Gilmour and Robert Fripp. Then, everything relaxes so that the band could go into a classical mode that is gentle and soft as they pay homage to PFM’s Storia Di Un Minuto-era and everything fits at the right time at the right place.

The 12-minute title track gets even better.  Starting with a Synth-like Brass with a haunting call-like sound then the piano and Alessio’s voice comes in and it goes through classical and symphonic structures with variations of a ballad-waltz movement as it goes into The Lamb Lies Down on Broadway-era as if it was 1974 all over again that is hypnotic and adventurous thanks to Stefano Agnini’s whirling keyboard work in the realm of Tony Banks before it becomes a dramatic finale that is a thunderstorm for the last three minutes.

Tenue, is a lukewarm track that goes through a jazzy sinister dystopian paradise while Chiusa 1915 feels as if it was a sequel to Genesis’ Firth of Fifth as it pays homage to the Selling England by the Pound-era. You could tell that Davide is doing his Hackett-sque resemblance on the guitar and captures the spirit of the Peter Gabriel-era during their heyday and they pay tribute to the original five piece and show how much they were influenced by them.

The dooming yet soothing and moving experience on Tensegrita is both Luca Scherani and Stefano Agnini’s chance to shine as they both go into town with the keyboards and piano creating both some heartfelt, experimental, and established magnificent sounds to make it a stirring emotional composition. Pauvre Misere lets Davide goes through the movements through his guitar to make it virtuosity and make it adventurous to go through various and soaring time changes.

The closing 10-minute epic, La Temperanza, has this wonderful vibe and dynamic structures that is an electrifying way to close the album off. At times, it’s dramatic, atmospheric, metallic, Zappa homage, Jazzy, Folky, and again to the heart of Orchestral Rock that is completely a spiritual vibe and almost as if they could have done the score for Jean Cocteau’s Beauty and the Beast. Along with the second track, this is soon going to become a live favorite for La Coscienza Di Zeno to challenge and take heart with their music to go inside.


I have listened to Sensitivita 18 times already. And I’m completely hooked. This is a well-made and well-recorded album they have done to give it a wonderful structured beauty. With a lot of time signatures and difficult movements, La Coscienza Di Zeno is the real deal. So if you fancy the ‘70s Italian Prog bands, I highly recommend Sensitivita. You won’t be disappointed.
Posted by znathanson at 9:52 PM