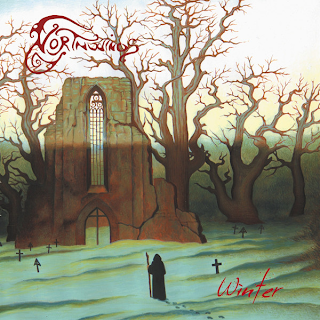 The influences of Prog-Rock and Doom Metal from the ‘70s can be a perfect match and an excellent combination, and when you have a band coming from the land of France, you can expect something quite interesting with this. Northwinds have been around since their formation in 1990 and their fourth album, Winter, is a relaxing and haunting experience. And since this is my introduction to the band’s music, I have to say that this year, there have been some amazing bands that are carrying the spirit of the two genres and they’re making sure the music is still alive.

Turned to Stone opens the album with a terrifying instrumental with an orchestral background as it goes through a danger of something evil is about to happen in the woods by featuring swoops of the choir on the Mellotron and the Moog synthesizer as the bass and drums follow along with a simple pattern of the beats to add the tension of the scenery. The 7-minute Land of the Dead, which features some Sabbath-inspired riffs, has some very mellowing and loud-like tempos between guitar, bass, drums, vocals, and the Hammond organ.

At times the piece sounds like something that could have been used for Ralph Bakshi’s 1983 animated cult classic, Fire and Ice while the pounding and enormous turned atmospheric crunch on Last Chance, they view into a hallucinating environment of a city gone wrong. Their take of Angel Witch’s Gorgon, begins with an Gothic Folk session with flute and mellotron for the first three minutes before getting into a driven force of pummeling action by staying true to the piece and a fitting tribute to one of the most overlooked bands in the history of the New Wave of British Heavy Metal and they know their love of the genre so much.

There are some moments of Julian’s Treatment and the Sabbath Bloody Sabbath-era in the composition, Black Tower. Showing more of the dark and cavernous touches where Northwinds have this doomy groove and then becoming a stirring power of a wicked layered edge. Then we come to the 22-minute epic title track, and its completely out of this world. It begins with a powerful organ session for the first three minutes and then into calm early Floyd-like session in the styles of Saucerful of Secrets and Atom Heart Mother.

The closing track, their take of Saint Vitus’ Thrasy Doom taste on Clear Windowpane, begins with a mellowing punk-doom-metal eruption with a funky wah-wah guitar sound, makes the piece a perfect way to finish the album off. For a band who have of both Prog and Doom, Northwinds’ Winter is not easy listen to, but after a few times, I’ve gotten quite a hang of it and this is a band, I’ll explore in the future and what they will have up their sleeves.
Posted by znathanson at 1:57 PM