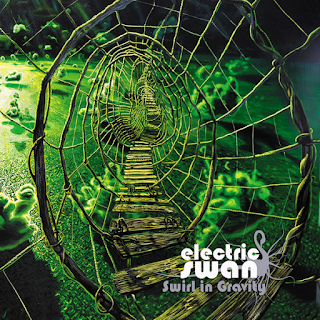 Let’s set the scenery, its 1973, and there’s an up-and-coming band from Italy that know the score with a heavy rock touch by adding the sounds of Blues and Psychedelic music up a notch featuring a female vocalist whose resembles Janis Joplin and can sing very damn well. That band of course, is Electric Swan and they have a huge nod to Led Zeppelin, ELP, Grand Funk Railroad, and Leaf Hound. Their second album Swirl in Gravity, which sounds like an episode out of Rod Serling's The Twilight Zone, manage to keep the retro sound true and with a lot of pure energetic high voltage.

For example on End of Time, Paolo “Apollo” Negri does some keyboard and synth swirling terror that have a Keith Emerson and Jon Lord feel as Lucio “Swan” Calegari goes into a Jimmy Page feel on the guitar resembling Heartbreaker that is pummeling and strong before ending with a spacey atmospheric moog into different voyages of the solar system.  The soothing Lonely Skies still carries the same inspiration on the third track but with some powerful bass lines that Edo Giovanelli has got into his magical fingers by going into different frets as he and Apollo go into the city of bass and organ that is a very funky and metallic vibe.

The coolness vibe on Wicked Flower has an uplifting raunchy soulful bluesy rock feel that is a kick in the gut as Swan just nails his guitar technique by making wail and scream while Apollo helps him with some soaring organ sounds to match the solo and paying tribute to Tony Iommi a-la wah-wah style! Garden of Burning Trees which features saxophonist Clive Jones from Black Widow, is a haunting jazzy doomy psych ballad as Jones goes into a John Coltrane-like solo that is a relaxation and calm-like atmosphere while the thumping tribute to Joplin on Move Over that Monica Sardella does, she’s not trying to rip off the Princess of Blues Rock, but paying tribute and show how much she can belt out her work and as if Janis is watching her, and is in tears of Monica’s voice.

It’s a perfect tribute and explosive at the same time as the band stay true to the piece from the Pearl sessions while the opening title track goes through a bluesy heavy Deep Purple trace with a spacey moog sound to get you in your motorcycle for an adventure into the grand canyon as the closer, Drag My Mind, has a slow and a late ‘60s groove that features more guitar layered structures between rhythm and lead section that Swan does.

For an up-and-coming band which started out as a solo project that Lucio Calegari began at first from his days with Wicked Minds, it’s quite possible that Electric Swan are soon going to hit the Prog festivals sometime in the future and this album and the band needs a lot of recognition big time. A must have album for this year.
Posted by znathanson at 1:55 PM