Flower Flesh - Duck in the Box 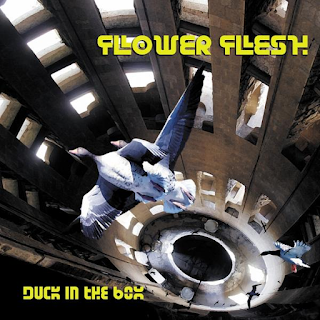 With a dosage of Symphonic Music, ‘80s Neo-Prog, and Story-Telling boundaries, up-and-coming Italian Prog band, Flower Flesh give a huge amount of energy in their debut album, Duck in the Box that is a tribute to their heroes including; Yes, Marillion, PFM, and Dream Theater in their hearts and soul. The band was formed in 2005 by bassist Ivan Giribone and keyboardist Alberto Sigarlato, who decided to create Flower Flesh and not just to stay tribute to their influences in the Progressive Rock scene, but more of an homage and honor and keeping the spirit of the genre alive.

With an album cover of Ducks flying into the soaring city and having this Sci-Fi background feel, the music feels like they have written a rock opera for the 1976 sci-fi cult classic, Logan’s Run. The band really has something up their sleeves with their debut album and it’s by far, a spiritual journey from beginning to end. Beginning with the throttling, Falling in Another Dimension, with heavy guitar chords/riffs, swirling moog and keyboard tempos while vocalist Daniel Elvstrom just nails the vocals by going into an rocking and sometime operatic arrangements that he comes up with.

My Gladness After the Sadness begins with a piano concerto and classical guitar introduction done by Andrea and Marco Oliveri before they go into the beautiful touches of a heavy turned melodramatic version of Le Orme meets Kansas’s music featuring a militant beat in the midsection which resembles the French Revolution. Elsewhere, It Will Be the End has some heavy and adventurous turned uplifting beats with guitar and synth with a fantasy rock background as God Is Evil (Like the Devil) is a jumping yet haunting ‘70s organ-driven sound to make us feel like its 1972 all over again.

Now when it comes to Prog epics, you know you’re in for a big surprise. The Race of My Life has a spooky element that could have been inspired by Edgar Allen Poe’s The Raven featuring sounds of nightmarish beauty, power metal, jazz rock, atmospheric haunting sounds of a person’s dying wish with inspirations of Camel, and folk-like touches that makes the piece so touching and emotional. Antarctica is back to the retro rock sound.

With the sound of the heavy drums, keyboard, and mellotron touches from the Pawn Hearts-era by Van Der Graaf Generator, Marco Olivieri creates some mythical and beautiful scenery’s with his guitar as Andrea pays tribute to Hugh Banton on his keyboards, they go into town and take it into different time-changes to know the score. The last track, Scream and Die, which closes the album, is calmness and folky turned operatic metallic atmosphere dealing with someone who is dying for a confrontation after the person stabs doesn’t care and watches scream in horrendous pain and die a horrible death.

It’s a disturbing piece, but strong and powerful to close the track as Daniel Elvstrom goes into his Peter Hammill and James LaBrie phrase on his vocals to give it all he’s got by adding power and electric energy to the mix. If you admire Progressive/Power Metal, Obscure along with Symphonic and Neo-Prog, Flower Flesh’s Duck in the Box, is a tremendous and wonderous adventure from start to finish. And while this is their first album, hopefully they might make it into the Prog Circuit in the future and years to come.
Posted by znathanson at 11:00 PM