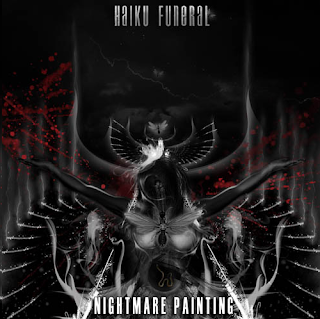 When you have a dark and an electronic atmosphere, you know something is about to happen. One of the most interesting bands is a duo called Haiku Funeral. They have a combination of Industrial, Post, Experimental, Avant-Garde, and Death Metal surroundings in their work and their third album, Nightmare Painting, is one of the most terrifying and scariest albums I’ve ever heard this year. Most of it reminded me of something out of the score for the ‘80s sci-fi cult classics, Blade Runner and The Terminator and while this album is not easy to listen to, it makes you feel that you are trapped inside a dungeon and there’s no turning back.

There are touches of; haunting synthesizers, vicious metallic bass lines, choirs, Jekyll and Hyde vocalizations between the good and evil, it’s all right there and they really got something that is beyond the score of the Horror genre. The sounds of the clean vocalizations in the realms of Venom’s Count Cronos from William Kopecky and the grasping shrieking vocals of Dimitar Dimtrov, who resembles an earlier incarnation of Per Yngve “Dead” Ohlin from Mayhem. Now while I’m not a huge fan of the Black and Death Metal scene, this band is very interesting and they know their love of Horror and Satan very well.

Beginning with the Doomy Jazzy post-apocalyptic twist of String Bass, Moog, and electronic drum samples of The Nightmare Door and seguing into Blacklight Amniotic Erotica that resembles My Life with the Thrill Kill Kult and the Downward Spiral-era of Nine Inch Nails. And then, everything becomes chaotic with the wildly bass and drums, work that becomes a thunderstorm on the Scorpion Ritual while Behemoth Rising becomes a calming yet screeching turned monotone views of Forbidden Love and Alchemy of Pentagrams.

Raining Nightbirds is an avant-garde atmospheric electronic scenery paying homage to the Krautrock scene of the ‘70s and becomes a futuristic terror of a dystopian city along with The Flags of a New Empire Burn that lets everyone know that this world that they are living in is not what you expected it to be. The Gothic structures of Death Poem, is synth and an eerie crisp of different styling’s on the acoustic guitar to give it an ambient rainfall while Heavy Breasted Innocence goes into the Industrial Metal dance mode featuring a punchy yet jazz bass lines, monotones, and synths go into space and time.

Your Heart a Black Tunnel, sounds like a mourning yet atmospheric background between electronic drums and a moody rhythm as it feels like the ending credits for the 1994 film, The Crow as Damnation, which closes the album is back into the Avant-Garde sounds as they pay homage to a darker version of the Future Days-era of CAN. This is not an easy album to listen to, but Nightmare Painting is almost the soundtrack for an Italian Horror film that could have been used in the 1980s that would have sends the audience into a mental institute.

Remember if you are really ready to listen to this album, you are 100% warned and get ready to embark on something beyond the doors for a dosage of the three genres between; Black Metal, Post-Rock, and the Avant-Garde sounds of Krautrock with a Spacey attitude in the ‘70s.
Posted by znathanson at 3:20 PM