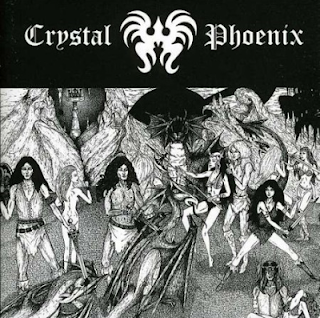 It’s been 22 years since Black Widow Records was launched back in 1990 when they released obscure gems and new bands from the Italian Prog and the Doom Metal scene and they released their very first album with a band called Crystal Phoenix. The band was formed under the spell of a woman named Myriam Sagenwells Saglimbeni, who was a virtuoso, singer and did the design cover for the sole self-titled debut album back in 1989.

It has this combination of the New Wave of British Heavy Metal, Classical, Doom, Gothic Folk, and Prog at the same time from start to finish while there’s a dosage of fantasy story-telling from the comic-book era from the realms of Richard Corben as if they were influenced and inspired by his work for the music of Crystal Phoenix. The album itself is eruptive, haunting, and operatic at times to really get you going. Like the opening throttling track, Damned Warrior, resembles the sounds of Angel Witch and Iron Maiden’s music while 474 Anno Domini and Somewhere, Nowhere Battle features some moody acoustic guitar fingerpicking, dreamy moog, and Celtic Flute work that have this medieval structure value that puts you back into the Renaissance period of the 15th century.

Loth-er Siniell has this haunting and mourning ballad with a catholic choir, more of the acoustic crisp sounds including some of the horn and string-quartet structures on the keyboards that it almost sounds like something out of an ‘80s version of Trees’ The Garden of Jane Delanwey and I bet it inspired the Diablo String Orchestra’s sound on Justice For St. Mary to capture the essence of the Phoenix’s sound and vision. The two-part epics, Heaven to a Flower and Violet Crystal Phoenix, are one of the most beautiful and disturbing mini-opera’s that Myriam has written.

There are the touches of thumping drum beats, spooky organ sounds, heavy guitar lines between rhythm and lead while Myriam belts it out with her operetta style on her vocals as the instruments carry her to an uplifting and tension-like calmness to follow where her voice follows her within the beat as the closer 7-minute epic, Dark Shadow, in which it’s an homage to the gothic fantasy soap opera from the BBC, resembles a heavier version of the Fish-era of Marillion before ascending back into the NWOBHM sound with an homage to the Toccata and Fugue a-la allegro style on the guitar for a climatic ending.

The bonus tracks feature three of the demos that were released in 1989 at the time the band were making their debut album while the 2011 retro sounding version of 474 Anno Domini, stays true to the original composition. While this was the beginning of a new adventure for Black Widow Records, their first album from the label, is an astonishing adventure on where they would go next on the road that would take them.
Posted by znathanson at 4:33 PM