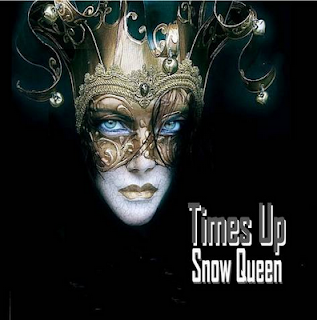 With a touch of Fantasy and Story-Telling Songs, one of the most up-and-coming bands that have took me by surprise is a band that has come from the South of Wales by the name of Times Up. Snow Queen is their second album and after hearing it about five times already, I am completely blown away from what I was hearing. There’s a touch of the ‘70s sounds of Progressive Rock and American Pomp Rock in there that they have been influenced by when they were young and carrying the spirit of the two genres and staying true to the genre as if they had carried them in their back pocket until the timing was right.

Snow Queen is almost the alternate soundtrack to an animated movie as if they could have recorded it for the classics; The Last Unicorn and The Swan Princess and would have gotten them a huge turning point for them and success to those films, but the music itself is astonishing and spiritual at the same time and feels that you are embarking on a Magic Carpet Ride into another dimension. As expected, there’s a huge inspiration of; ELP, Starcastle, early King Crimson, Camel, Genesis, and Styx in there to make it sound like a huge amount of dosage of Symphonic Rock like no other and it’s quite evidential by listening to this from start to finish, that this album could have been recorded back in 1977.

Again, this album feels like a Spiritual Journey. Starting off with Secret Garden, it becomes a swooshing harmonic and melodic melody synth into soaring skies while the thrilling guitar rumbling solo by Mike Hagland makes it an exciting thunderstorm, then it becomes a folky turned into calming movement that Geoff Smith does in his vocals as to let the listener know that the story has just begun. Nightmare Days reminds me of the Grand Illusion-era of Styx with the acoustic rhythm introduction and then becoming a haunting ‘70s power chord rocking touch while The Prophet starts off with a middle-eastern vocalization and whispering spoken word gibberish and then it goes into the same situation of the second track then goes into the midsection of a wonderful Flute and Synth workout, to make it an excellent exercise between the two instruments.

The title track, which is an 8-minute epic, is a mind-blowing experience. A thumping guitar solo, more power riff chords, and Chris Squire-like bass lines between Mike Hagland, Andy Gibbon, and drummer Steve Leman, go into town together for a grand old time with a touch of adventure in their heart and soul as if they were working with Yes on this composition. Spellbound begins with a rumbling militant snare drum and moog/mellotron work in the styles of King Crimson as the battle rages on as it goes into an emotional and wonderous resemblance of Kansas stylization on the Point of Know Return-era that is spot on.

Fall of the Queen closes the album with a wonderful ballad, between electric, acoustic guitar, and double-tracked vocals before kicking off into the sunset with the Keyboards as Geoff sings his heart out on what will the next morning will hold for the survivors who kept as prisoners from the Snow Queen. This is perhaps one of the best albums I’ve listened to and while this is their second album, it’ll probably be one of the best of 2012 to come out.
Posted by znathanson at 9:36 AM