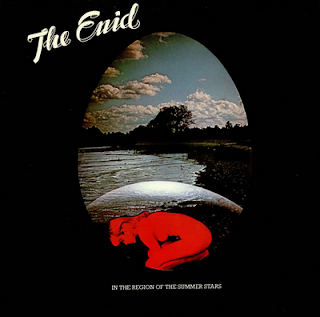 After Godfrey released his first solo album, Fall of Hyperion on the Charisma label in 1974, it was time for Plan B for him when formed The Enid. Launched in 1975, The Enid were in the realms of Symphonic and Orchestral Rock as Robert wanted to take his magical compositions into unbelievable world of soaring epic film scores that could have been the alternate soundtrack for The Ten Commandments and Ben Hur combined together to make it a yet classical orientated album that is purely emotional and somewhat dazzling for a ballet score for Godfrey to write for.

More like as if they were a part of Rick Wakeman’s band, The Enid’s music wasn’t like comparable to Yes, but more of the structures of Pink Floyd, Triumvirat, early Rush, and the Lamb Lies Down on Broadway-era of Genesis. These two albums (In the Region of the Summer Stars and Aerie Faerie Nonsense) with the original recordings in 1976 and 1977 originally released on EMI and reissued on Operation Seraphim, shows The Enid’s eerie and melancholic mind-boggling structures show that Godfrey is no fluke, and more than just a genius, but how he conducted and structured the compositions like a burning candle that won’t fade into the night-like sky.

Listening to these two albums back to back makes you wonder how they went on through as the Punk scene was rising and ignored the John Lydon and Bob Geldof bullshit on how Prog was already dead as they trucked along in the underground scene to receive word of mouth and attention from Sounds magazine that achieved the cult-like band that has been going through various line ups and different performers as Godfrey keeps The Enid’s train trucking. Yet on Aerie Faerie Nonsense, it was almost as if it was they could have written it as a Rock Operatic version of Hans Christian Anderson’s The Little Mermaid, not to mention the cover of the album of the woman looking up in the underwater and seeing the sunlight to become human.

There isn’t anyone singing the songs, they are instrumental, but the views of; darkness, militant, lushful, and beautiful touches of the arrangements on the pieces as Godfrey was like a mad scientist when he was writing the pieces to conduct and create different time signatures and letting the players know what they were going to do and how they were going to move in the direction that Robert would want them to go into. You have to understand that Godfrey knows his classical crunches back from when he was a young kid and his days as a conductor in Barclay James Harvest and shows the Supernatural Fairy Tales isn’t dead, but the rainbow flies through various formations.

These two albums are pomp and circumstance and they aren’t like Yes’ sleepy 20-minute epics of Tales From Topographic Oceans, nor ELP’s dreadful classical Works album which is where they were taking Prog into the wrong direction with a symphony orchestra to take them on the road with them in Giant stadiums that were a countdown to bankruptcy, The Enid showed that they didn’t want to go into that direction, but not to mess it up and they didn’t. A must have for anyone who wants to get into The Enid’s music, it would be the first two albums and Fall of Hyperion.
Posted by znathanson at 5:51 PM

You seemed to think pouring boiling oil on those involved in the Occupy movement was an acceptable method of dealing with your own inadequacies (according to Facebook). One can only hope the 1% have you under their wing, the day their reckoning comes. I doubt they will though.

BTW your reviews are incomprehensible.

You should maybe invest in a dictionary, or some form of grammar guide... or at the very least, read them back to yourself before publishing.