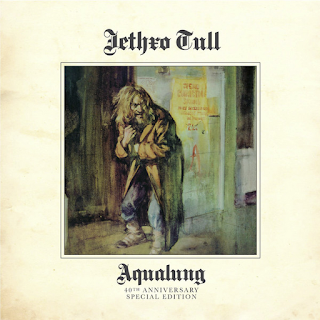 Although it’s the famous guitar riff intro that any 11-year old kid wants to learn to play guitar instead of playing the intro to Led Zeppelin’s Stairway to Heaven, there’s always something beyond the influential boundaries of Folk, Prog, and Hard Rock. And of course, Jethro Tull has been doing this since day one and clearly, there is no stop sign for the band.

It’s hard to imagine why their sound was very stadium and arena rock and a part of the progressive rock genre. With Ian Anderson’s songwriting about a homeless bearded man sitting on the park bench eyeing on 15 year old girls and becoming a pedophile and taking the context with a sense of humor and often darker territories that no other song writer ever thought of doing. 40 years go on, and Aqualung can only be considered one the masters of Jethro Tull’s work that is not just a masterpiece, but a stunning and crowning achievement in their works.

While the Floyd were writing a symphonic and orchestral work with Atom Heart Mother, Jethro Tull’s Aqualung dealt with the issues of god and how the religious freaks would go into an extreme way that they weren’t telling you and the album was telling the listener that while the first two tracks deal with a mini rock opera, the rest of the album is how hard it is to be a normal person and wondering how it feels to be part of the strange faults that the organizers in the religion can be a danger zone.

And while the album skyrocketed in the American and British charts, it was a turning point for them as they were going through changes like no other as if they were about to embark on the yellow brick road for success, controversy, and infamy that would lay ahead of them as they were getting ready to open the door to see what would ideas that Anderson would have from brainstorming. Like the eruptive title track, pieces like; the haunting 7-minute anti-religious song My God featuring Anderson’s mind-blowing flute solo, the lukewarm folk crisp acoustic melody of Mother Goose and Wond’ring Aloud, chugging punches of Hymn 43, and the hit single of the train to destruction of Locomotive Breath, makes you wonder that the new stereo mix is a lot better than the 25th anniversary edition.

Porcupine Tree’s Steven Wilson, has done one hell of a job giving it a cleaned up work and the instruments and Anderson’s vocals are right in your face and he knows his Prog music very damn well. The sound quality is jaw dropping and almost like you want this in your collection of good music in your Prog CDs and Vinyls. So if you have the quieted version of the 25th anniversary edition, get the 40th anniversary edition and make it worth the wait.

While the stereo mix is volcanic, the unreleased tracks are really out of this world. A new mix of the rompous drinking sing-along of Lick Your Fingers Clean and an earlier take of My God, Wind-Up, and Up the ‘Pool makes you understand why they never made it to the final takes of Aqualung. Now there might be some discussion on these songs should have been on the album as double album, but dare I digress, this is a must have for any Tull fan to sink their jaw like teeth into and probably get the super deluxe edition with the Vinyl, DVD and Blu-Ray edition on there, it would have Ian Anderson’s feet tickling for joy!
Posted by znathanson at 10:45 PM

Your mangling of the English language makes me sad. It might not be so bad if you weren't convinced of how "adept" a writer you were. Delusional? I think so. One only has to view your spam on the CRPP Facebook page to see that. Absolute atrocious attempts at writing. Please stop.

Alright, alright, listen, I get it, not everyone's going to like me John, but if you don't like the review or the blogsite, then don't read it. And I will stop posting reviews on CRPP's facebook site from now on.