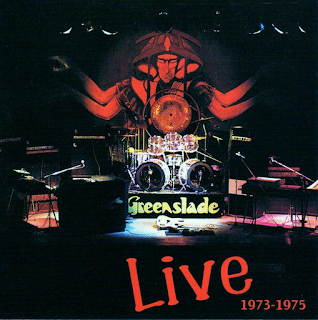 While they could have been bigger than ELP and given the mighty pomp and circumstance trio and huge run as if they would have been on the opening bill for them, Greenslade’s music was more of a laid-back symphonic sound combined with jazz fusion like a lushful flower growing so brightly, that it would fill the nursery house with an explosive organ solo like no other. Here with these Live recordings that the band did from the time they promoting from their sole self-titled debut album to their last album, Spyglass Guest, makes it a wonderful experience to hear the band going at full throttling drive from 1973 to 1975.

And since we are in the new year, this is the 40th anniversary of the band’s formation and when you listen to the live recordings, it feels that you have got your ticket and sitting right there in the front row watching Dave Greenslade from Colosseum, as he uses his fingers with electricity and thunder storming the organ like a mastering wizard while drummer Andy McCulloch from King Crimson and Fields, storms the drums like Billy Cobham meets Elvin Jones as Tony Reeves comes up with some fusion-like bass lines while Web and Samurai’s lead vocalist Dave Lawson shines like a knight in shining armor in his vocal arrangements as the four of them create magic that is beautiful and touching.

Among the four piece line-up, they take their music very well and seriously getting it right and seeing where the time signatures would take them, there are some dazzling live versions of the instrumental and song pieces which really had struck a chord that would have Greenslade fans go ga-ga over and have their jaws dropped from beginning, middle, and end. The blistering volcanic versions of Sundance, Drowning Man, Feathered Friends, and the homage to Apollo 100’s Joy and The Nice’s era of the Thoughts of Emerlist Davjack on Spirit of the Dance which had Lawson and Greenslade himself going at it playing rhythm and lead organ and Rhodes style!

They do it not just to rip off Keith Emerson or Rick Wakeman, but if you imaging them, watching these two men, smiling to come up with a solo and laughing it off to see who would win the running race as Tony Reeves comes up with some Lake-like bass lines as McCulloch is just enjoying this with the drums and having a good time. The sound quality is very damn good with two of the keyboards, bass, and the drums in front of the audience as if they were tapping their feet and clapping along to the rhythm from the band members.

As 2012 is here, and maybe hoping for the original Greenslade to reunite one more time to give a huge voltage and maybe a new album, the future is still bright and no stop sign for them, this live album and the first two albums (Greenslade and Bedside Manners Are Extra), are highly recommended to get you into the music of Dave Greenslade, if you want to get into more of the symphonic or paying tribute in the styles of Emerson, Lake and Palmer, this is the band that you must get into. Underrated? Yes, Brilliant? Yes! The credit they deserve? Absolutely!
Posted by znathanson at 12:45 AM