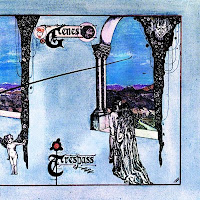 By 1970, Genesis were moving away from the Psychedelic-Pop songs that paid tribute to The Bee Gees and The Beatles after the release of From Genesis to Revelation in 1967. They decided to go beyond the abyss and created an album that was; medieval, folky, hard, and epic at the same time also with the release of their second album, Trespass. “We set out as songwriters, and we were sort of happy to write that, but I always think there is something inside of us a yearning of an exploration and to mix styles and as we set out to adventurous and push the boundaries” claims lead singer Peter Gabriel during the making of Trespass on the Genesis box set 1970-1975 DVD. The album started off inside a Cottage which Mike Rutherford simply referred it as “The Cottage Era” where the band spent six months in Dorking as they were beginning to write music for the Trespass album. The album itself was a starting point for Genesis because they wanted to go beyond the scenery and an underground sensation that would have made which simply known as the Peter Gabriel-era a huge buzz and word-of-mouth.
The album’s opening introduction to Trespass, Looking For Someone, is certainly a dazzling production for 7-minutes, also, featuring the heavy guitar solos done by Anthony Phillips and the pounding drums of the late John Mayhew that would have made Genesis almost a cross between Procol Harum and Family, as Peter is doing a Roger Chapman type of vocal while Tony Banks is coming up with some battlefield sounds on the organ that seems very fantasy like. White Mountain which is based on Jack London’s novel White Fang, is almost a tribute to the British Folk and Celtic scene of the ‘60s. A finger picking sound on the acoustic guitar which sound very similar to Zeppelin’s acoustic second side of Led Zeppelin III, the track then becomes a marching Sound with the drums and the organ while the flute becomes a death cry as well as Gabriel’s bullhorn sound as he describes about Fang’s battle between the wolves before it dissolves as a haunting moral piece with the humming and the organ. The two objects of Folk and Christian Music set to an alternate soundtrack of children’s novels, seemed almost out of place, but it fits well, Visions of Angels has more of a mysterious pastoral sound that has a lot of similarities of Fantasy on Edith Nesbit’s The Enchanted Castle than C.S. Lewis’ The Chronicles of Narnia that is almost 19th century if you want to prefer to it in a roundabout way while the 8-minute ballad turned explosive symphonic beauty Stagnation pays a tribute to J.R.R. Tolkien’s character, Gollum, and it could have been used as a part of the Lord of the Rings trilogy which features in the midsection a glorified organ solo done by Tony Banks and then it becomes whimsical for a moment as Peter explains about the creature who wants to drink the slimy water as he revisits his past and then, BAM! The last 2-minutes is an explosive power tour de force as the band go maximum by going psych and then fairport convention for a moment and then it goes back to the symphonic piece again into a dynamic climax. Four minute-pieces just don’t come out of nowhere for any pop band, but on Dusk, it again has a Celtic movements with 12-string acoustic guitars done by Phillips, Rutherford, and Banks as Peter goes Christian again in this lukewarm beauty. The last number is almost a tribute to Keith Emerson and the Nice in which Peter Gabriel mentions while the band were doing in which is to become a live favorite in the early days with their dynamic militant political prog taste of The Knife, an homage to Rondo and Bolero. Ahead of its time, sometimes odd, it remains one of Genesis’ all-time favorite progressive rock album.
Posted by znathanson at 6:58 PM