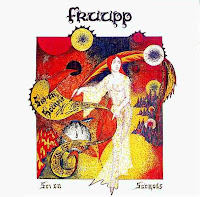 Fruupp decided to go more pastoral and symphonic after the release of their debut album, Future Legends. Their first album was deeper and sometimes classical meets Yes in a distinctive way. But they decided to not back down and made their music a little bit more polished and a bit baroque in the direction they wanted to do go further with. By the time they released, Seven Secrets released in 1974, it was more positive and to a great extent in a strong musical margin.
I wouldn’t whine and bitch about the 8-minute opening number, Faced with Shekinah, because it begins with a mourning harpsichord and oboe introduction that seems very Johann Sebastian Bach meets Beethoven as if they were joining these guys, and then it becomes of shifting piece from the players in the group as they play like a soccer match and the mood becomes a tension of high maximum volume of wizardry sounds of the guitar, keyboards, and the vocals as they were telling the story in a complex-song that is almost very Genesis-like. I was always wondering from beginning to end, that either I was going to love or hate this album. In the end, this is a shattering piece of work even though some fans might tend to enjoy their music in a glorified way.
They started to use a string quartet with a backing orchestra to make it more of a symphonic ballad while the band do a classical rock technique on Wise as Wisdom and then it becomes a passage statement when the band do their composition as the guitar and keyboards do a Floyd-like sound as if they were paying a tribute to the space rock legends. Despite the Tolkien-related title, White Eyes is a pastique and lovely song, not to be as a tribute to The Moody Blues Justin Hayward-era, the tracks develops from the classical symphony to dinner jazz music with people talking in the background and then dissolving into an acoustical ditty and then back into the Bo Hansson relative keyboard sounds that are done by Stephen Houston.
The similarity with its chugging speed and an eerie quality tone, Garden Lady has a common taste of German Progressive Rock space rockers Nektar and Yes’s Fragile album than Pink Floyd while Three Spires is almost like a painting of A Sunday Afternoon on the Island of La Grande Jatte. With its acoustic and again symphonic prog moments that could have been easily fitted from a Gordon Lightfoot song. Elizabeth brings back the string quartet sound as they go back into the Genesis mode as they indicate the ballet music scenery with its lukewarm vocals done by bassist and vocalist Peter Farrelly as the music becomes sounds very pastique again as the group do a time signature in ¾ ala symphonic prog jazz that would have made Coltrane and Miles Davis including Amaedus very, very happy with to hear such a magnificent beauty out of.
And if you think Elizabeth was the finale of the album, think again.
The closing title track that is just 1-minute song which is done by a background vocals done by Peter as he’s doing a folky John Martyn fingerpicking guitar work as the narrator deals with what the listener with what the secret is about. It’s about wonder and mystery of different songs, sounds, sights, and looking at it closely of wonderful things that is almost done by Bilbo Baggins which I think the narrator is actually Stephen Houston. All of the sounds and mysterious chord changing provocative key moments in the song that includes a strange album cover of an angelic woman from the future who looks like Elizabeth from the song who wants to help out for peace? Not a bad idea from a four-piece from Ireland.
Posted by znathanson at 9:26 PM