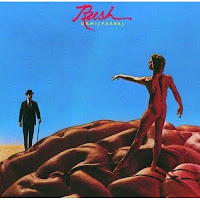 Already having achievement with their two previous albums; 2112 and A Farewell To Kings, it was time to let Rush to do a part two-like series of Cygnus X-1 Book 1: The Voyage which left their fans a question mark over what happened next to the main character after he entered the black hole. The album, Hemispheres, says it all. This was also a move for Rush because at the time, they were getting to go to a new direction as they were getting ready to go into the ‘80s as they were moving away from their heavy metal epic of 20-minute pieces to more of a Synthesized greek like battle in 8-minutes with their upcoming album that was in the works in the pre-Permanent Waves era.
The opening 18-minute epic, Cygnus X-1 Book 2, starts off with a bang. The tales of exploring the feud between Apollo, who shows his love of science and love while Dionysus wants to have peace, and all hell breaks loose in this prog-rock battle as the band do some heavy improvisation of the rock opera sequel. Neil Peart’s drumming is imaginative as he comes up with some awesome drum patterns while Alex comes up with some heavy duty guitar work, and Geddy Lee, being the narrator, leaves you breathless as he plays some awesome bass lines on his Rickenbacker. In the midsection, there is an atmospheric Tangerine Dream-like sound for the explorer to come in as a disembodied spirit who wants to Apollo and Dionysus to stop their Civil War and their feud against each other and buried the hatchet. Then the band comes in to lead a climatic climax as Neil bangs the gong for the explorer’s scream as the finale is Geddy singing alone with an acoustic guitar as he sings about the war being over and staring a new life on the planet that is exhilarating and more edificated.
On the other hand, the power rocking autobiographical Circumstances deals with Neil Peart before he joined Rush, who in the early ‘70s was in London trying to decide to whether to stay in England and be disillusioned of what he sees or head back to join the group. The Trees, starts off as a classical guitar arrangement from Lifeson while Geddy sings about the rests in the forests beyond the Trees, then becomes a mind blowing crown achiever with this Political brawl between the humans and the oaks demand a union to stay where they are and not be cut down.
The 9-minute instrumental suite La Villa Strangiato becomes a lukewarm Prog centerfold to close the album to a T. It shows Neil, Alex, and Geddy’s composition as they are like football stars playing their instruments so well and taking turns one by one. It starts off classical, then becomes like a Yes meets King Crimson meets Zeppelin a la number. You can tell these guys are having a ball playing this piece and just having a good time and making fun of themselves. All in all, this a groundbreaking achiever for Rush fans who followed the band and the younger generation who are following in the footsteps of Rush, including a new Progressive Metal band that are carrying the footsteps of Rush, Heart of Cygnus.
Posted by znathanson at 9:25 PM