Genesis - The Lamb Lies Down on Broadway 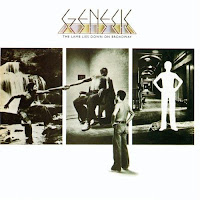 It was like that it was almost recorded in the early 1980s with this magnum opus. Genesis’s last album to feature front man Peter Gabriel, is a gem of a kind. Now with a new hairstyle, dressing up in a leather jacket with a Puerto Rican makeup on his face, he now looked like someone living around the block a dozen times.
Soon as Peter was thinking about going up to Solsbury Hill, the band almost sounded very mystical with their concept album. Almost coming out of a strange fictional science fiction/fantasy book with other concept pieces, The Lamb Lies Down on Broadway storyline is weird. It’s strange tale of graffiti-artist street punk named Rael who lives in the Subways of New York City who goes in a bizaare adventures, brings up some astonishing highlights: The sexual rocker of Counting Out Time, the mellotron segues of Fly On A Windshield/Broadway Melody of 1934, the new wave of pre-80s new wave sound of Tony Banks synthesizer with Back In NYC, the beauty Carpet Crawlers, and the dynamic titled-track that would make Peter and Genesis sounded like they were recorded in the 22nd century or in the late ‘70s.
Since there are some beautiful compositions done by Tony Banks and his keyboards, there’s the twisted side of Genesis. The roaring upbeat rhythms of In The Cage and Here Comes The Supernatural Anaesthetist which features Steve Hackett’s magnificent virtuoso guitar solo as he takes over while Phil Collins comes up with some fusion technique on the drums, The avant-garde keyboard whirling composition on The Waiting Room and a group of weird characters: The disfigured creature of The Colony of Slippermen who wandered lonely as a cloud, the erotic half-snake, half-woman creatures of the Lamia in which Rael eats that would make a big run for your sexual dreamland, and the old fairy Lilywhite Lilith will take you into the tunnel of light. As Peter left the band after his last gig with them in Paris in 1975, Genesis would make two more albums (A Trick of the Tail & Wind and Wuthering) and then Steve would leave the band, and soon Genesis would become an 80s mainstream band.
Going back and listening to it again, it almost sounded like an alternate soundtrack to Alejandro Jodorosky’s 1970 midnight movie classic El Topo and setting the scenery in which it never saw the light of day. Slippermen, Erotic sexual female snakes, and a Puerto Rican street punk? They never get much better than this.
Posted by znathanson at 2:10 AM