Julian's Treatment - A Time Before This 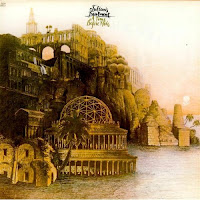 A lost concept album from the mind of science-fiction writer/keyboardist Julian Jay Savarin, A Time Before This is considered a lost gem for this lost progressive rock group. Almost sounding like they came from a different planet, they had this sound that even King Crimson wished they could have released something good like this. Their first and only album is one of the most essential reissues that I’ve enjoyed listening to in part of all concept albums for this short-lived band in the early ‘70s. The concept album involves the only surviving human living in a post-apocalyptic planet on Earth, leaves his home to search for a new planet while he meets strange alien life-forms including Alda, the red planet of the outer worlds of annihilation and Altarra, the blue planet of love. Then he finds out if he’s the only survivor on earth or just as a safety measure to live in a different planet in the solar system. While the concept seemed like something out of a Star Trek episode, the music is astonishing.
The introduction, First Oracle narrated by lead vocalist Cathy Pruden, sets the scenery of the story as it heads into The Coming of the Mule, a sinister robotic composition featuring ambient sounds from Julian Jay Savarin’s keyboard while guitarist Del Watkins does some heavy guitar sounds to set the tone of the piece. And then, the albums heads off into the outer limits with the group following in their trails. Phantom City and The Black Tower have a jazz-orientated King Crimson rock tempo. During the album, in comes some beautiful lushful pieces with evil (Alda, Dark Lady of the Outer Worlds and Altarra, Princess of the Blue Woman), the ray of lightning arrangements on once again a jazz relative number with Fourth From The Sun, the galloping rumble on their Floydian sound on Strange Things, an homage to the Canterbury sound in the Solar System on The Terran with a psychedelic pop taste to it, a classical rock touch with the two brothers of the planet that is almost recorded inside a dark and disturbing cave (Twin Suns of Centauri and Alton, Planet of Centauri), and the solar planets combine with a darker twist of the question if we, as humans, are the last surviving members on our home planet with the self-titled track.The group disbanded after the release of this album. Forward to 1973 with a new line-up including bassist John Dover and keyboardist Julian Jay Savarin when they released another concept album based on Julian’s fantasy novel The Lemmus Trilogy with Waiters on the Dance with a new female vocalist from Catapilla, Jo Meek. After the album was released Julian became a writer in the mind of Science-Fiction and he’s still writing today. Strange creatures and Post-Apocalyptic Earth and female planet gods? Not bad for a short-lived band that were ahead of their time
Posted by znathanson at 12:21 AM