Rush - A Farewell To Kings 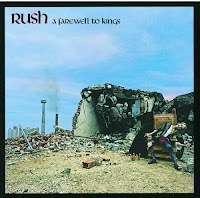 For most of the Prog Rock generations, you couldn’t deny one band from the outskirts of Canada who have gold records, packed stadiums and arenas, high voices, and mind-blowing drum solos, still a cult band to this day since their hey day in the mid ‘70s of one band, Rush. As the British Prog Rockers like; Yes and ELP were selling out Madison Square Garden, The music was growing from a different part of the United States to having their own influential sounds in the British Rock scene. With a bit of Yes and Led Zeppelin to the mix to fill out the gigantic tours, all it took was a three-piece, looking like nerds and sorcerer’s from a new world, it was up to Rush to go all the way.
After receiving a huge breakthrough in 1976 with their essential science-fiction dynamic concept of 2112, The group went to Rockford Studios in Wales to come up with material for the next album to come up that was something good in the footsteps of their fourth album and give the so-called punk bands the middle finger in the world of Tolkien and poetry in the new land of wonders, a true milestone. Their fifth album, A Farewell to Kings had all the ingredients it needed; Two Sci-Fi epics and the technical skills of their craftsmanship as musicians from the following footsteps of the sounds from Pink Floyd to early Genesis, had a combining force of pure and hard ‘70s heavy metal.
The main highlights are the radio friendly hit single for them Closer To The Heart, the sinister 11-minute epic of the black hole of invisible force of an astronaut forcing to go inside the heart of Cygnus X-1, and of course Xanadu, another 11-minute epic based on the 19th century poet by Samuel Coleridge’s Kubla Khan. While the three center points remain live favorites, around the fire place, there’s a little place in Rush’s soul inside the pleasuredome. A Farewell To Kings is a magic carpet ride to enjoy listening to. There’s the heavy folk rocker Cinderella Man, based on the 1940s classic film Mr. Deeds Goes to Washington starring Gary Cooper, Geddy Lee’s warmful vocals on the Moog pastiche with the Tolkien related works of Madrigal, and the titled track which starts out as a classical fingerpicking guitar introduction from Alex Lifeson, and then it becomes a firestorm piece with Neil Peart’s drumming going all over the place on the drumkit while Geddy sings about turning the pages of history and coming up with some excellent bass riffs. The true masterminds is superb almost getting an A+ from your last day as a senior in High School and moving on to be cult heroes without any radio airplay.
After releasing another album which features the sequel Cygnus X-1: Book II from another essential classic, Hemispheres, Rush went into the ‘80s with Permanent Waves and Moving Pictures and seeing the group going into a little bit Art Rock in a scientific way. Today, they are still growing after the release of Snakes & Arrows in 2007 which remains one of the highlights of Rush’s career and knowing they still got it. As for Rush, they still drink the milk of paradise and they still do to this day.
Posted by znathanson at 2:52 PM