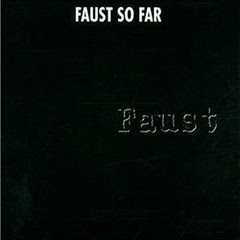 Whenever you think of strange and bizarre weird music, you think of Captain Beefheart, Frank Zappa, and Henry Cow. But if you have a band from Germany in the 1970's that go into pure avant-garde punk experimental madness, then you've come to the right place at the right time with Faust and their second album in an album cover that's black with So Far. They were the band that would have Miles Davis be very happy with and to be a part of. This album show's Faust that they couldn't get into the whole bombastic feel of Yes, ELP, or Genesis type of sound.

This is more of the Velvet Underground meets Bowie meets John Coltrane in a twisted local environment that would make the doors screech open to. The opening of the banging drums, one piano chord, and a punk-rock chugging of a guitar chord with the humor taste of bubblegum music of It's a Rainy Day Sunshine Girl, is an ultimate killer. You have the quirky lyrics of 'It's a Rainy Day Sunshine Girl, It's a Rainy Day Sunshine Baby.' Really fun lyrics to really piss and sneer all of the other teenybopper music. On the Way to Abamae is a folky acoustic guitar instrumental composition while it goes into the 10-minute heavy guitar sounds that would blow the speakers up on No Harm, an homage to Iggy & the Stooges in a Krautrock way with lyrics like ' Daddy take a Banana, tomorrow is Saturday! ' This track is another killer that would make you turn the volume noise up a notch!

Mamie is Blue, an avant-garde extraordinare pice of music that has amps going into total destruction while the previous self-titled track, is more of a brass Parliament Funkadelic meets Edgard Varese arrangment. The last four tracks, show a little bit of comedy and vaudeville ragtime fun. I've Got My Car and My TV, an anti-car and TV commerical message for the viewers watching, the Zappa-style sounds on Picnic on a Frozen River and Me Lack Space while the last track closes it up into a swing paris jazz rock style of In the Spirit brings it to an end. So Far is one helluva album. Play this along with The Faust Tapes and turn it up. You are warned again!