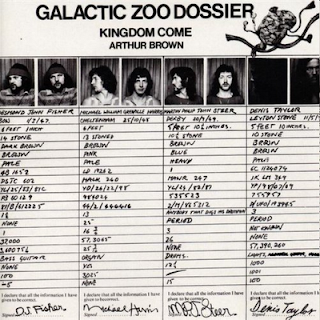 Whenever you think of Arthur Brown, you think of the god of hellfire with him wearing a helmet that's up in flames wearing a pre-KISS make-up that may have influenced the heavy metal glamsters of the 1970's with Arthur Brown and the single Fire from the Crazy World of Arthur Brown. But you've never seen the other side of Arthur Brown. After the break-up of the crazy world, he formed Kingdom Come in 1971 with their debut album Galactic Zoo Dossier, a mixture of space madness, weird haywiring music, strange narrations of the bible that could have been erotic in the twilight zone or in the outer limits. If this is more of the crazy stoner version of Pink Floyd's Meddle, this is it!

Tracks like the punk space rocker of Internal Messenger sounds almost a combine twist of the Pretty Things S.F. Sorrow meets Hawkwind's In Search of Space with screeching guitar sounds and pure lunatic voices of Arthur Brown that he would do during the late '60s. Galactic Zoo and Metal Monster are almost a lunacy of crazyness and a freak out experimentation of sinister avant-garde noises to keep you frightened for someone underneath the bed, The guitar delay, bass walking sound of Simple Man is a mellower dark composition with VCS3 synths creeping up the doorway. Night of the Pigs, an oinking political army marching Robert Calvert like story with guitars into metal territory while Sunrise is more of a mellower blues soul tradition into the milky way and goes into a sneering hard rock solo.

Galactic Zoo Dossier is one of the most insane albums that I've listened to from Arthur Brown's Kingdom Come. Man, those stoners surely were going nuts on their instruments in Space and the Solar System.
Posted by znathanson at 4:38 PM