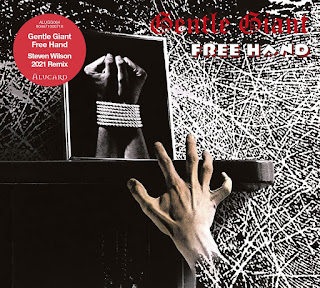 In 2012, during the time at the beginning of promotions for Prog Magazine’s compilation of Prog Rocks! Ray Shulman describes the origins on their seventh studio album Free Hand. “The idea was to kind of get back to our roots. We lost my brother Phil. He left for the fourth album. And so it was an idea to get back to our roots and go back to the kind of writing style in our earlier albums.”

There’s no denying that Free Hand is quite a leap forward for Gentle Giant to take it a step further by having all the creativity they had done. From the swirling label of the Vertigo label to signing with Chrysalis Records, Free Hand was also one of their most successful releases. Reaching the top 50 in the Billboard album charts, this shows how much they have come a long way.

Now in a new reissue from the Alucard label and remixed by Steven Wilson who had done their previous work including Octopus, The Power and the Glory, and the Three Piece Suite, it is time to take a trip down memory lane by focusing on why this band are deserving more recognition and were often under the radar in the Progressive Rock genre.

From the moment you listen to groovy introduction of Just The Same you feel the synthesizer solo work done by Kerry Minnear taking it a step further by channeling his Herbie Hancock approach before the vibrations of the clapping rhythm going back and forth, it is quite a swinging tune that Derek sings in that style as if it was returning to the 1930s of vaudeville and a bit of Leonard Bernstein to kick things off.

On Reflection starts with the introduction of the vocals going back and forth between Ray, Derek, Gary, and Kerry going into this complicated approach on the acapella sequence as if they were returning to their Octopus-era before the melodic piano, glockenspiel, and vibraphones done by Kerry, gives some insight to honor the grand wazoo himself, Frank Zappa.

The first two minutes gives you an insight on a trip to the medieval period for Kerry reflecting the good memories of school friends, and the best parts of your child hood as if Minnear himself has become a multiplicity version of himself that Wilson goes for the jugular to bring the two versions of Kerry singing a duet before the heavier rocking approach done by Gary and Ray go into a duel with his keyboards.

The title-track becomes a cat-and-mouse introduction between Kerry laddering effect and Ray’s climbing upwards and downwards on his bass before it transforms a dueling clavinet battle to be free from the torture and learning how to fight back once and for all. I can tell throughout on the new mixes on the third composition shows the guitars, drums, and bass are really cooking as it goes into a hot boiling temperature by giving Gentle Giant’s way of cooking, a hot and spicy flavor with some renaissance-like twists for the lemon that is pouring into the soup!

Time To Kill features I believe the first video game with the sound effects of Atari’s PONG before the sinister nightmares of the pounding piano, thunderous drums and guitars setting up the crime scene on what just happened. Derek is our detective lending our help with his Mundy partner on foot, seeing where the criminal has left some clues and mysteries to solve the case by bringing the killer with some complexing justice in an operatic approach. As Gary brings some of the most brutal arrangements into the forefront, Weathers and Minnear make their instruments sound like a gun battle between the police and the criminal in a final showdown.

His Last Voyage gives Steven a chance to have Kerry come into the forefront in his mixing. With a bit of the reverbing effects, it is a journey into the man’s life as he goes on his last journey into finding his inner self. He and Ray blend well in this mournful waltz-like sequence, knowing that there’s no turning back once he leaves his country to one day find peace with some unexpected changes throughout Gary and John’s motif throughout the song.

And then it becomes a Miles David-sque ending for the band to come out swinging with a Kind of Blue finale channeling the introduction of All Blues. Gary knows how to nail those wah-wah bluesy effects by nailing the hammers down as he makes his guitar cry out to the gods at the end as it becomes a climatic finale with a fanfare vibration.

Talybont. Now this is where the medieval vibrations come into the center. Channeling the styles of Gryphon’s Red Queen to Gryphon Three, Gentle Giant haven’t forgotten their renaissance roots from their first two albums as it comes out swinging. Between Clavinet, recorder, and violin goes from medieval, classical, and heavy rocking vibrations that gives the band a lot of team work.

Mobile is a nod to the Celtic Rock influences that has a Folk-Rock arrangement. You can imagine Derek is dancing the jig town to town. With a nod to Steeleye Span and Horslips, they have a way to show respect to the genre by taking it a whole new level of moving forwards into the future.

Steven’s mixes on this album are quite intriguing. I loved how he would bring the instruments and vocals through various locations on the EQ by honoring the band’s legacy. There will be a dividing line in the sand on whether they will accept Steven’s new mix on the album or not, but here, Free Hand is the real deal.

Posted by znathanson at 8:49 PM