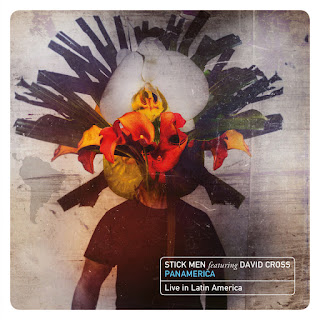 This 5-CD set consists of Stick Men’s live recording that the band did last year between August and September of last year during their Latin American tour in ten countries from Guatemala, Mexico, Costa Rico, Argentina, Chile, Uruguay, and Brazil to name a few. And to allow to bring King Crimson alumni David Cross who appears on this set along with the Roppongi release back four years ago, it shows that David is still lending a helping hand once more.

Listening to this incredible set, you can just close your eyes and imagine yourself being at those performances that they did in Latin America last year. Tony, David, Markus, and Pat give the audiences a gig they’ll never forget. And from those recordings, it will keep their memories going on forever and ever.

The sets include improvisations, soundscapes, suites, and their full-length gig in Costa Rica. There are so many highlighted moments throughout this incredible set that Iapetus and MoonJune have unleashed this year to get your Crimson blood pumping out.

Hide the Trees has this moment where you can feel the heat gauge growing higher and higher as the band goes into the flaming fires that have grown bigger and deeper than ever before as the tackle through the danger that awaits them. I can imagine the audience are mesmerized between Reuter, Cross, and Mastelotto entering this intensive dungeon that can be very challenging.

David’s Improv gives Cross a chance to come to do these incredible arrangements on his violin while Levin’s chapman walks into the jungle by walking on a big gigantic scale. And Cross is glowing brighter and brighter by the second as the scenery becomes this huge puzzle piece as the plot thickens unexpectedly while the Montevideo Suite sees Stick Men’s atmospheric voyages that walk into a journey that awaits for our bandmates to enter.

It’s almost as if they’re walking on this tightrope that can be unexpectedly dangerous and never knowing who is going to cut the rope or not. But at times it can be sinister, electronica, jazz grooves, and very Lynch-ian. Now when I say “Lynch-ian”, I mean the nod to the filmmaker himself as if he gave Stick Men some creative ideas for the mystery and disappearance of Philip Jefferies from the Twin Peaks series.

The next section becomes this Chapman improvisation as Tony and Markus do this dueling nightmare to see both instruments collide in a thunderous hay-wiring effect that can go into some insane bat-shit modules while Pat’s drumming pounds like a powder keg that is waiting to explode with some extreme measures. Now onto the soundscapes on Disc 5.

For me, it’s one my favorite moments from the Panamerica set. It gives both Markus and David to move away from their incredible compositions with Tony and Pat by honoring the legacy between the classic Tangerine Dream line-up of Edgar Froese, Peter Baumann, and Christopher Franke and the Red-era of King Crimson.

The compositions on the fifth disc are very mysterious, surreal, and experimental. But for Markus, there’s a lot of those improvisations by honoring the genre from the realms of Popol Vuh, Klaus Schulze, and Cluster. It shows that Reuter himself is keeping that spirit alive by making his own alternate soundtrack scores between two film classics by Werner Herzog, Fitzcarraldo and Aguirre: The Wrath of God.

But as I’ve mentioned before of the nods towards King Crimson, they have to make sure they haven’t forgotten their roots of where they started between Tony, David and Pat. From the pieces including Red, Larks’ Tongues in Aspic Part II, Level Five, The Talking Drum, and an incredible performance from the Costa Rica set of a soundwaving version on Shades of Starless.

They’ve also performed three tracks from the Prog Noir album including the title-track, Mantra, and the mysterious twist of Plutonium by honoring the masters of Carl Orr, Yes, and Tchaikovsky. Not only that, but they have a surreal sense of humor throughout those tracks they performed in Costa Rica.

Panamerica is one of their best recordings that Stick Men has unleashed this year. If you think that Roppongi was the best, this one takes the cake. And while it’s been three years since they released another studio album after the release of Prog Noir, let’s hope that in 2020, Stick Men releases another follow-up. But Panamerica is quite a journey throughout another roller-coaster ride with them.

Posted by znathanson at 5:35 AM