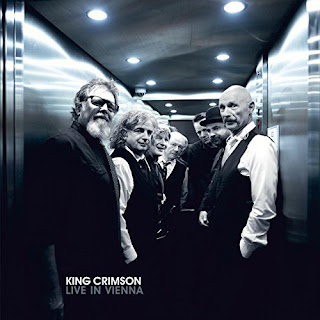 This 3-CD set consists of King Crimson’s live performance they recorded in Vienna two years ago on December 1st. Mixed from the original multi-tracks, it features the two-set performance from the evening show. Since I considered the 2-CD Chicago performance as an experimental and tribal atmosphere, the Vienna performance brings more clues and mysteries for you to embarking their adventures into their possible universes that are infinite worlds that you’ve never seen before.

For 50 years, King Crimson despite through various line-up changes, in the words of Robert Fripp, Crimson has “A way of doing things.” And that’s how they do throughout their music. They aren’t just a prog band, they are a band that take these ideas and take them through the levels of intensity, hidden momentum, and sinister surroundings that would make your skin crawl.

Their live recording at the Musequmsquartier in Halle E, you can close your eyes and being at that venue and being in awe and supporting the masters with some volcanic eruptions that is on here. For me Live in Vienna is almost the icing on the cake. They revisit the classics including, Pictures of a City, The Sailor’s Tale, Epitaph, The Court of the Crimson King, and 21st Century Schizoid Man. The seven-piece line-up aren’t taking you through memory lane, but keeping their spirit and legacy alive.

And they know that this time, it’s going to be both ferocious and brutal. You have the 13-minute version of Starless. You can imagine both Tony and Robert taking the temperature levels by making the heat gage as high as it can go by making their instruments go through some menacing overtones.

But it’s Mel Collins laying down some incredible sax improvisations throughout the last three minutes as the three-headed drum beasts of Mastelotto, Harrison, and Stacey reign in the terrors once more before closing the night out with some Mellotron and dooming bass with a bang. But what I also love on the Vienna recording is that the three-headed drum beasts do some tribal workouts.

You can hear some of the aspects between The Hell Hounds of Krim, Devil Dogs of Tessellation Row including a little help from Tony Levin bowing the electric string bass. They play like the masters they are by lending a friend, some helping hands to keep the beat going. Each of the drummers play not like a jazz drummer, but laying down some swinging vibes by channeling both Buddy Rich and Magma’s own Christian Vander.

But I love the nods towards the THRAK-era that covers even more of the puzzle pieces even more as Jakko himself sings it out through Suitable Grounds for the Blues. And also the gentle warmths of Peace and as a master of ceremony for the Cirkus to begin. For me, whether like him or not Jakko’s voice and guitar playing grows even more and more to keep the vibration’s going.

Now once you get to Disc 3 which features four tracks recorded from Cophenagen, Milan, Barcelona, and Antwerp, Robert goes beyond the textures of Crimson and delving back into the soundscaping visions that he’s been doing since the mid-‘70s by working with Brian Eno on No Pussyfooting.

You have Levin, Collins, and Fripp going through the opening doors to reveal something that is minimal, nightmarish, and atonality of both Schoenberg Softened his Hat and Ahriman's Ceasless Corrputions to name a few. They channel Arnold’s compositions which I can hear from one of his Second String Quartet, Fourth Movement. And it’s quite the atmosphere that Robert tackles to show Arnold Schoenberg’s compositions by going beyond the twelve-tone techniques.

On the Cophenagen performance that’s on disc 3, they revisited Fracture. Now this hasn’t been performed since 1974 from their album, Starless & Bible Black. It is really quite a treat for them to go back and perform it live again. Robert really challenges his fingers on the fretboard as if he’s finding the escape route before it becomes a gigantic booby-trapped location.

The last three minutes on Fracture is the band going through this dangerous tightrope to make it right out of there before time reaches out as Jakko and Robert help through their guitar exchange as Levin’s fuzztone bass and drums go intensive together by making it through the exit sign and finally getting out of there in the nick of time.

Live in Vienna is King Crimson continuing more and more to surprise both the listener and the audience themselves. While Chicago as I’ve mentioned is their finest, Vienna is almost the cherry on top. But this is where the turning point was for Robert was planning to do for the following year in 2017. And this was only just the beginning.

Posted by znathanson at 5:02 AM