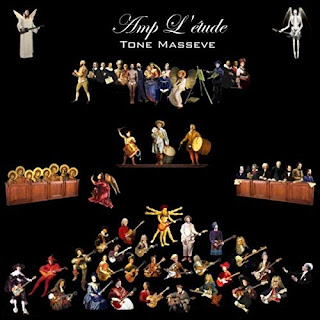 Now this took me a little bit of a surprise for me listening to an artist name Tone Masseve. He had been playing guitar since he was six years old. Not only he was listening to the sounds of Classical music, but in the footsteps of guitarists including Joe Satriani, Jeff Beck, Brian May, Robert Fripp, and early Eric Clapton.

The debut album released this year entitled, Amp L’etude took more than 20 years to complete. The collaboration between him and Jethro Tull’s drummer Doane Perry, is a very interesting combination, but when I was listening to the debut, it is not only bringing his music to life, but the vision and ideas that Tone brought to the table.

He tips his hat through the classical interpretations in the inspirations that it took from The Beatles, Jimi Hendrix, Queen, and Procol Harum to name a few. And it makes it something very special to go with it. Tone recorded his guitar parts that took two years to record. Now unfortunately in 1997, while Amp Letude was still in the works, Tone had pneumonia and passed away on November 27th.

Back in 2016, a group of musicians have come together to complete Tone’s vision for Amp Letude. Not only Doane Perry is involved, but Bassist “Willy” Sam Pell, percussionist Garry Kvistad, a Choir, and El Hectro Plait on Drums that he did on Track 7 (Prelude #4 (To The Grave)). For me listening to Tone’s debut, I could feel his presence throughout the entire album from start to finish.

And the musicians on here are bringing Masseve’s creation to life and releasing it and knowing he would have been very thrilled to know that Amp L’etude has finally been unleashed. And the fires are still burning and it will never ever burn out for Tone Masseve. The Moonlight Sonata (On the Hill of the Skull) you can hear the combination between Beethoven and Satriani, creates a darker beauty as Tone combines his two guitars into one as he plays the sonata and Joe’s virtuostic playing to show his appreciation.

With the styles of Schubert and the Beatles on Maria (She’s So) Ave, it brings together those essences to life as the choir honors the fab four’s legacy and the sounds bringing up to the ascending heavens by showing gratitude and warmth farewells to say goodbye to your loved ones. On Prelude #6 (It Tolls For Thee), there are some aspects between Queen’s second album and a little of Purson’s The Circle and the Blue Door-era on the track called Rocking Horse. It's almost as if the lullaby has become this mournful howling at the moors with no turning back.

The opener, Aire on a G String (A Whiter Shade) are Tone’s tip of the hat to both Bach and Procol Harum. He and Doane’s drums take you outside of the church and into a warm-like resurrection for some new chapters that will await you. Perhaps one of my favorite tracks on Amp L’etude is The Sunken Cathedral (Turns the Tide Gently, Gently Away).

I can imagine both Brian May and the late great Jimi Hendrix are in awe of Tone’s creativity of his playing by opening more of the floodgates as he is now the new captain of the ship to search for more hidden treasures that have been sunken over millions and millions of years ago. And now he’s bringing it to life. There are some incredible moments on here between the bells tolling for the arrival of this Cathedral to see for the first time and being in awe of the legendary castle and the tribal percussion's that make it come up to the surface.

This is now my second time listening to Amp L’etude. I have to say this, I was really impressed of Tone’s brilliance of what he has done to combine classical music and progressive and virtuoso music into one. As I’ve mentioned before earlier, if he were now, I think he would really appreciate and be thrilled to hear his debut album come to life for 2018.
Posted by znathanson at 12:25 AM