Sanguine Hum - Now We Have Power 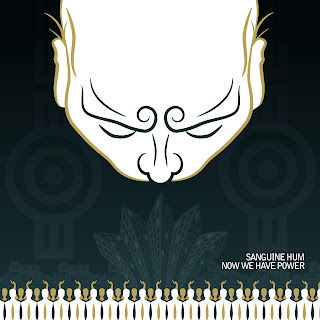 It’s been two years since I’ve listened to Sanguine Hum’s music. And they’ve never let me down. Since I discovered their sound thanks to Sid Smith’s Podcasts from the Yellow Room, they always would come up with something fantastic from the essence of experimental, progressive and alternative rock sounds in their music. This year, on the Bad Elephant label, they’ve released their new album, Now We Have Power which continues the story of Don from the 2015 album, Now We Have Light.

Now this review is going to be filled with some spoilers. So if you haven’t listened to Don’s story on those two albums, you might want to leave the blog……….now. Okay, now we are back (Anyway to the Bad Elephant label, how’s the weather outside?) So now onto the story. After Don finds this time bubble in his Drastic Attic, he goes backwards nearly 50 years ago as he is seen by 100,000 people as the news helicopters hover over him and he is completely aghast on where he was.

The music tells his story. You can imagine yourself being in Don’s shoes to realize that this isn’t just a dream, but reality coming to life. Sanguine Hum go beyond the levels and take you through the conclusion of his story. And bringing original drummer Paul Mallyon as a special guest to conclude the adventures, makes Don’s story coming full circle. So here we go on the review.

Speak to Us is this crossover between Gentle Giant and Rush’s Permanent Waves-era. Matt Baber himself takes his medieval melodies on his keyboard to follow suit by Wonks and Waissman as they enter this psychedelic corridor before heading back into some odd time changes as Baber takes over the controls to reach the soaring skies with some incredible synths.

Pen! Paper! Pen! Paper! Winks and Baber create the tension as Don himself begins to shout those words for Nurse Millie by giving him both the pen and a piece of tissue to write something. Sanguine show you the opened doors on what is really happening to the characterization of this man’s attempt to take his life by raising the levels up while Flying Bridge is Baber’s ‘80s atmospheric Tangerine Dream-like voyages as Don’s witness by chatting with this strange creature before the noise becomes static near the end.

Wonks narration on the acoustic ballad, Quiet Rejoicing gives now that Don has lost his memory due to amnesia, helps brings some of the puzzle pieces together as the hearts are lifted for a clear awakening. The moment you listen to Speech Day, you begin to realize that Don is about to deliver one of the most awkward speeches that is the mother lode.

Like something straight out of Nicolas Roeg’s 1976 sci-fi classic, The Man Who Fell to Earth, the music begins to rise more and more as he begins to speak. Once he begins his speech, the audience begins to realize that it doesn’t make sense as he’s saying gibberish and the other half want to pummel him one way or another. The tension in Tall Tale is where all hell begins to break loose.

Joff’s guitar sounds like a harder crunch. And he knows that through his instrument that Don himself can’t come back from the mess that he created and now his followers turn his back on him. Now We Have Power is a bittersweet story to Don’s story. One of these days I hope Sanguine Hum turns his story into either as a graphic novel or a 2D animated movie and bring it to life. Worth exploring? Yes.

Posted by znathanson at 1:04 AM