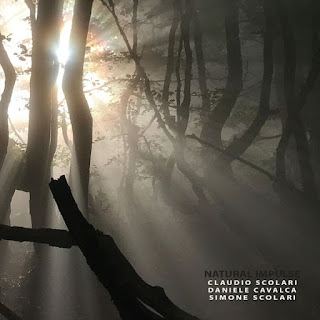 I don’t know how many years since I’ve listened to some Jazz albums after delving into the waters of Franco Baggiani’s 2014 gem, Memories of Always. But this time, I’m putting some of my toes back into the water once more. And this one, is a very interesting combination between electronic jazz from the minds of Claudio and Simone Scolari and Daniele Cavalca’s Natural Impulse.

This is their third studio album released this year via Principal Records and their follow-up to their 2015 release, South Hemisphere and 2012’s Synthesis. While I’m very new to the Scolari’s and Cavalca’s music, Natural Impulse is for me opening up the gates to witness something mysterious, spiritual, and fascinating ideas that are combined into one.

It has this combination between Tribal, Bebop, Experimental, small twists of the Canterbury sound, and free-jazz. When you listen to Natural Impulse, you have this door-opening vibe between Terry Riley, Miles Davis, Elvin Jones, and McCoy Tyner as if the four of them had done a session together in 1969 and creating these visual ideas and try something different that is beyond the realm of Jazz with some creative moments that are out of this world.

The music sometimes would go into weird tunnels that take you through some unexpected territories that the Scolari’s and Cavalca would walk right into with the nods of a Coltrane-sque Piano nod to A Love Supreme, but in a cat-and-mouse walk that make you feel as if you are a detective searching for more evidential clues to pick up the pieces once more.

It also these film-noir-sque vibe that the trio would create with a futuristic atmosphere. The usages of percussion, synthesizers, and trumpet, adds some of the tense moments on when the killer would strike again. Not only that, but the architectural landscapes to see the beauty of what the cities were back in the day were beautiful, have now become struggle and loss with abandonment.

Natrual Impulse is a small challenge to embark on, but what is one here is very, very intriguing. Would I delve deeper into their music to see what I was missing? Perhaps. But I would recommend it to go back into the detective’s offices and help them more to get the puzzle pieces back together again and solve the case right.

Posted by znathanson at 9:41 PM