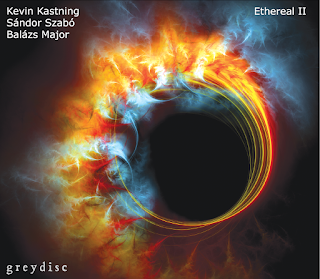 Kastning still continues to surprise me instead more and more throughout his releases on the Greydisc label. The usage of both the 30-string contra-alto guitar and 36-string double contraguitar would make you question and answer more of the clues and evidential moments that he would help you solve the case. Kevin’s follow up to Kismaros is called, Ethereal II.

He brought along two people who previously worked with Kevin are now teaming up with him for his new album. With percussionist Balazs Major and Baritone guitarist Sandor Szabo, Ethereal II is embarking more mysterious adventures to see and hear what the trio would come up with next and going beyond our solar systems.

What Sandor would create on his baritone guitar is to go through by not just taking a rocket to outer space, but landing in through various cities that were once the brightest of the future, have now turned into a menacing and very deserted location. And throughout some of the compositions that are on the new album, you can hear some of these ominous cries throughout the cold wintery mountains throughout the landscapes of Antarctica where the sun never, ever sets.

Balazs’ percussion helps both Kastning and Szabo out by encountering deeper into those areas in the blue glaciers of those mountains that are snowy and filled with mystery with some spiritual guidance whilst making the music with a soundscaping atmosphere and would have made founder of ECM Records, Manfred Eicher very happy on what he’s hearing from start to finish.

Ethereal II is Kastning’s achievement and I hope there will be more for him to continue in 2019 and seeing where Kevin will take his instruments next into the nearest future. And in the words of Fairport Convention, “Who Knows Where The Time Goes.”