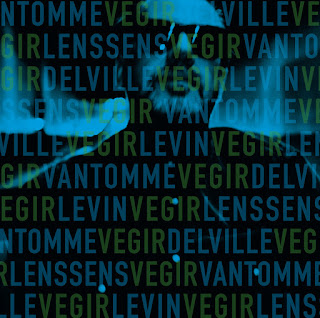 Dominique Vantomme is a Belgium based pianist, keyboardist, composer, and producer. He’s worked with many of the European Rock and Pop acts while being a Jazz piano instructor at the Music Conservatory in Kortijk, Belgium. That and the collaboration between Chapman Stick and Bassist Tony Levin (Peter Gabriel, King Crimson, and Stick Men), Guitarist Michel Delville (The Wrong Object, Machine Mass, and douBt), and Belgium drummer Maxime Lessens.

It seems like an interesting combination, but it works! The four of them created this ominous, dark, haunting, yet nightmarish to kick 2018 off with the release of Vegir. The origins of the Vegir project started back two years ago when Dominique went to meet with his old friend, MoonJune labelist, Leonardo Pavkovic. And then, he befriended Tony Levin.

The quartet recorded the album back on October 29th, 2016 at Studio Jezus in Hoboken as it was mixed by Fritz Sunderman and mastered by guitarist Mark Wingfield (Kevin Kastning, Dwiki Dharmawan). Listening to Vegir, it’s almost as if you were at the recording sessions being in awe of the masters to bring the genre of experimental, jazz, and progressive music back to life, but done in the scariest way possible.

Not only that, but it is almost as if someone was creeping up behind you as if someone is lurking underneath your skin. And that is what Vegir does. Not just to give you the creeps, but being prepared to fasten your seatbelts. Because the music will chill you from beginning, middle, and near the end.

Vegir begins with Double Down. The opening track that clocks in at 7 minutes and 37 seconds, Dominique gets the car running between both the Rhodes and Mellotron before Tony and Maxime come into the seats between the back and the front of the station wagon. And then, Michel comes in last before Dominque gets the car started with these hypnotic effects.

Delville does these psychedelic wah-wah effects in the background as if Vantomme was driving through an endless passageway that is something straight out of David Lynch’s Lost Highway or Twin Peaks. Michel and Dominique go into this haywiring mode as Delville screeches through the instrument as if at any second he’s about to boil the kettle with a high pitch scream.

Part Agitation Free, part Soft Machine’s Third-era, it is an intensive introduction to start the album off as if Vantomme has already lit the fuse to let the Cannon erupt at any second. Sizzurp has this reminisce of the opening of the late ‘60s and ‘70s Italian Giallo films. It’s Dom’s synths channeling the VOX organ plus the spooky vibrations of Goblin’s Claudio Simonetti and Italian Progressive Rock band, Unreal City.

Then at 1 minute and 54 seconds, Dom and Michel go into some hard heavy walks followed by Levin’s bass riffs as if the three of them are walking into some deep, dark alleyway. However, in the midsection, the hay wire voyages of space comes in at light speed before Maxime calms everything down with his drum patterns as Delville screeches in the reverb effects. You can tell that Dominique is paying homage to Steven Wilson’s 2009 debut as a solo artist with the release of Insurgentes.

The grooves really give the quartet to feel all of the power and the energy flowing with its sections that can be terrifying. Levin and Lenssens keep it together for a texture of a dooming approach. Then, near the end it heads back into the VOX organ finale of the Giallo films. Now we’ve come to The Self-Licking Ice Cream Cone.

Here, the quartet brings their hats to a bow of the Canterbury scene. You can imagine them showing how much their appreciation of the movement to make sure the flames don’t burn out in the water. Dom’s nod to both Mike Ratledge and Dave Stewart (Egg, Hatfield and the North, and National Health) is shown as he channels both of the keyboardist doing some of the Hatfield and Soft Machine’s improvisation.

But the three of them, give Tony a chance to come center stage. With Agent Orange, Levin’s Chapman lays down the tracks as if he’s on a dangerous tightrope. And you may never know if the rope is going to be cut or not. But the composition, it’s a film-noir story in a movie inside your head.

You can tell that Levin’s Chapman is dealing the situation on the aftermath of a horrific scene for the agent to find out what really happened in the gruesome murders while the music increases on the right track. There’s the King Crimson motif’s that flow between 1973 and 1995 from Larks Tongues’ in Aspic and THRAK.

MoonJune Records really kicked it off this year with this amazing release. I have listened to this three times now. It’s quite surprising to see what the label will think of this year for me to be a part of their train and seeing where they will stop and what my ear will come up with next.

Whether it would be a band or artist, Leonardo Pavkovic knows his stuff and I can imagine that he’s not just the train conductor, but he’s also riding the train to see where the magic and mystery lies ahead in those tunnels the train is about to go into.

Posted by znathanson at 2:27 PM