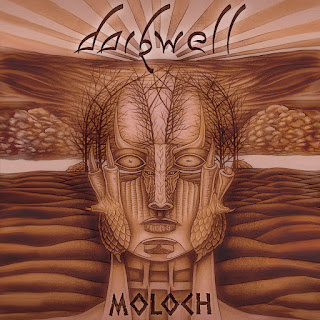 Darkwell are an Austrian Female Fronted/Gothic Metal band that formed back in 1999 by bassist Roland Wurzer and guitarist Roman Wienicke. Their musical influences from their background is a cross between Type O Negative and Fields of the Nephilim. Now for me, I don’t hear that in their music. But more of both Gothic and Symphonic approach and I can hear the influences of Amberian Dawn and Within Temptation in Darkwell’s music.

They released two albums and a mini CD from 2000 to 2004. In 2003, lead singer Alexandra Pittracher left the band due to musical differences as Stephanie Luzie Meyer (Atargatis, Seasons in Black, and Diodati) was discovered as they emphasized the independent path. They toured during that time period in the mid-2000s with Atrocity and Leaves’ Eyes. After the tour was finished, they took a long hiatus break.

It wasn’t until 2012 they were thinking about returning. Then, they reunited with the original singer Alexandria and they knew that the flames of Darkwell was still growing. And they returned for an official show at Wave Gothic Meeting in 2014 at Leipzig, Germany. And it still is growing when they released their new and third album entitled, Moloch on their new label, Massacre Records.

You have songs like Loss of Reason. It’s a nod to Amberian Dawn’s River of Tuoni-era and bits of Alexandria channeling Sharon Den Adel and Heidi Parviainen. It is also emotional metal with climatic duels between guitar riffs, doubling drum sound, and also midsection keyboards. Meanwhile, the Fall of Ishtar contains some real punching sounds from Bachler’s drums, and Nussbaum’s guitar followed by the strings and the organ done by Raphael Lepuschitz.

It is prog and elevated as you tap your foot and almost head-bang to the entire song with some essence of Tool while Golem and Awakening resembles some church-organ sounds as it head towards the darker tunnels of the creature itself. The heart-wrenching symphonic metal goes into overdrive with Bow Down. Here, Darkwell bring the mysterious synth intro and machine gun rhythm of guitar and drums before letting more of the bullets out for a powerful and killer composition.

There is an homage to both Epica and early Within Temptation thrown into the mix and throw in the Beauty and the Beast arrangements of clean vocals/growling styles thrown in. Mind you when the growling vocals in the background, it's been considered as the “Cookie Monster” vocals. But it’s very good and with epic proportions as Alexandria nails it down on her voice.

I had an amazing time listening Darkwell’s Moloch. I’ve always have a love of Female Symphonic Metal when it comes to bands like Within Temptation, Amberian Dawn, Edenbridge, and Stream of Passion to name a few. This one is up on my list so far of this year as the Autumn has just begun. And I hope I will one of these days discover their back catalog. But for me Moloch, is not just a good album, it is in your face with both Gothic and Symphonic Metal to the core.
Posted by znathanson at 1:00 AM