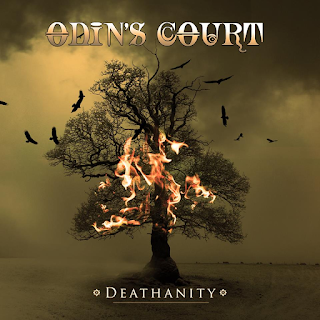 In 2008, Progressive Metal band Odin’s Court release their third album entitled Deathanity on ProgRock Records. And the album itself was received critical acclaim in the Prog community. Last year, the band decided to fund the album via Kickstarter in order to re-record the album and improve the sound. And with bandleader Matt Brookins doing some improvements on his part on doing the engineering and as a producer, it’s very interesting hearing this.

Now mind you, I haven’t heard the original mix of the album. But for me the R3 edition which is released on Matt Brookins' record label, D2C Studios, it means that not only they revisited and rebooted the album, but they; Re-mixed, Re-mastered, and Re-recorded the whole album from start to finish. For me, I was very impressed from what I’ve listened to of the entire album. And while I’m very new to Odin’s Court’s music, lead vocalist Dimetrius LaFavors. who did guest vocals on Kinetic Element’s Travelog, does a fantastic job on his vocals that makes it very appropriate and giving the style and sound of the band’s sound.

Deathanity (R3) is a spectacular enjoyment between the essence of both Progressive Rock and Progressive Metal rolled into one. With five enduring highlights on the album, it will rattle the house perfectly. Moody opener Terracide begins with spoken nostalgia dealing with the murder of the Earth. Matt Brookins' guitar really shines through his essence of Brian May and David Gilmour that gives it an excellent introduction to start things off.

Their homage to Ludwig Van Beethoven sees Odin’s Court going into the different time changes in their take of Symphonic Metal with a roaring yet eruptive take of Ode to Joy. It’s almost like cannons blasting at the right moment between the bass lines and guitars followed by speeding drum lines. Mammonific has these powder keg explosive riffs/improvisations and guitar melodies as the vocalizations are beautiful and hard that just makes me jump and scream for more. And at times it’s melodic also with beautiful piano touches in the midsection.

Crownet sees Matt doing these speed-arpeggiated guitar introduction before laying down the laid-back grooves before heading towards some cool bass rhythms into a strange twist of a Bossa-Nova groove. And then, all of a sudden, it runs into the styles of the New Wave of British Heavy Metal meets mind-blowing Prog adventures from Guitars and Keyboard improvisations that makes it a real killer! Including different time-signatures that just makes my arm hair go up at the finale.

Cosmosera features this dystopian lullaby-sque scenery in which Brookins does on his guitar that gives it a spooky feeling and has a touch of Queen’s second album in the style of the intro Procession. Featuring peaceful passages and intense thrash with snarling vocals in midsections, it gives it a chilling yet emotional struggle that has sinister and uplifting tones to put you on the edge of your seat.


This is my sixth time listening to Odin’s Court’s Deathanity (R3). And while I’m new to the band’s music, I really got a kick out of this. With the essences again of Progressive, Power, Symphonic, Melodic, and Thrash Metal, this is a real recommendation worth checking out. And if you love bands like King’s X, Queen, Pink Floyd, and Iron Maiden, then delve into the music of Odin’s Court
Posted by znathanson at 10:31 PM