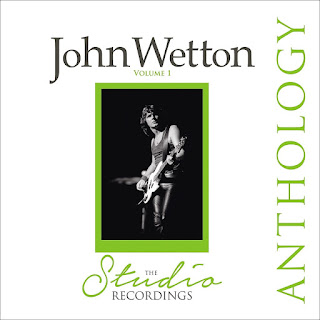 I’ve always been a fan of John Wetton’s work since 2001 when I was a freshman in High School with his days from King Crimson. He has been a busy man from day one alongside with Crimson, he worked with Asia, UK, Roxy Music, Family, and one of my favorites from the obscure Prog-Rock gems, Mogul Thrash. You could tell he shines through his vocals as he hits those notes whether he plays both Bass and Guitar.

That and this 2-CD anthology set which covers his time as a solo artist. There’s also a 15-page booklet, which contains liner notes by Nick Shilton, which features an interview by Wetton himself and the albums, he has done. It’s hard for me to pick which tracks on the 2-CD set because there are 32 tracks on here and I had to pick a few highlights on the anthology set which is the first volume of the studio recordings that he’s done.

Again, mind you, I’m not a huge fan of his solo work, but there are some centerpieces that show he’s more than just a sideman. Say It Ain’t So sees John going back into his roots of the sound of Asia’s sole self-titled debut album. It’s almost as if it’s a continuation of the hit classic, Heat of the Moment. But with an early 1980s AOR sound that captures the essence of the track that has a sing-along and fanfare composition with a stomping rhythm.

John Wetton brings some of his friends to lend a helping hand and letting him know they got his back. With Arkangel it is a haunting ballad that deals with being on the face of danger, but with the guardian around the people, there is hope when there is none. Robert Fripp comes in with his guitar improvisation and sends in the chilling notes coming in.

Elsewhere Free/Bad Company’s Simon Kirke on Drums comes into the picture with Cold is the Night. It is a reminiscent between Paul McCartney & Wings Venus & Furs-era and Genesis Wind & Wuthering-era. The piece has a calming yet ascending rhythm while the ¾ Celtic Folk-waltz brings the beauty of Jacques Brel and the Beatles music featuring Billy Sherwood (Yes) and Geoff Downes (Yes, The Buggles) bringing the forest atmosphere on Bass and flute Keyboards for Steffi’s Ring.

Symphonic acoustical beauty comes into mind for the Real World. It deals with where we are living right now. Even though there’s a perfect wonder, there is also a darker side to it. And Genesis own Steve Hackett’s harmonica brings an emotional side to the atmosphere with a Dylansque touch. And Hackett, with his guitar playing, he plays the harmonica very well and nails it down.


I’ve listened to the 2-CD set three times now. And it’s a very interesting compilation from start to finish. It’s more to just his work with King Crimson and Asia, but he can write very well on his songwriting to show his craftsmanship to the tables and see where he can come up with next. And if you love some of the bands that I’ve mentioned in the beginning, then this will be a perfect Hanukkah or Christmas gift to all and you might want to ask Santa if he admires the music of John Wetton.
Posted by znathanson at 6:57 PM