Quill - Brush with the Moon 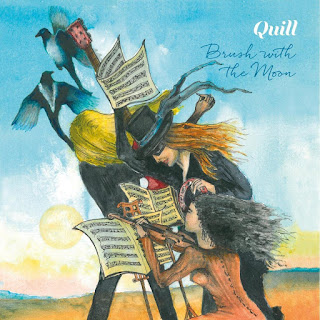 Quill is a seven-piece band from Birmingham, England in which it is home to bands such as; Black Sabbath, The Moody Blues, The Move, and Electric Light Orchestra. They have this sound between the combinations of Rock, Country, and Celtic Folk. Drummer Bev Bevan in which he was in those bands (Sabbath, Move, and ELO) is in Quill. This is also their debut album. It’s entitled, Brush with the Moon.

There are ten songs written by the late bassist Ben Brian. And he also did the artwork for the album cover and the 10-page booklet with his designs. Not to mention the lyrics. Ben’s wife Joy Strachan-Brian can sing very well in a melodic tone. Now the music itself, I have to admit, it doesn’t excite me very much. It’s not my taste of sound, in a kind of a not so bad, but pretty good type of feeling for me. But the band really has something in their sleeves.

Songs like the opening track Quicksilver and Schoolyard sees Quill going into the acoustic touches between Bon Jovi and Judy Collins in the mid-‘80s as if they had recorded an interesting collaboration together. Both of the tracks are touching and very emotional with the acoustics and Joy takes her vocals into those romantic areas.

Hollywood Blue is more of a Ray Davies-sque inspirational style of lyrics as if Ben had written this as a sequel to Celluloid Heroes while England goes into the essence of Celtic-Folk Rock as Joy pays tribute to her hometown. This track will soon be one of Quill’s live favorite one of these days. They also show their touch of a traditional African style of music in the styles of a calming percussion.

Not to mention the gospel background vocals before kicking into the mid-rock tempo at the very end for Nine Mile Camp. But the track Man in White in which it closes the album, deals with the tragedy on that morning in New York and Washington D.C. on September 11, 2001. You can hear the newsreels and the disturbing sceneries of what is going on. It’s haunting and emotional.


This is my second time listening to Brush With the Moon. I have to admit, I’m not that crazy about the music. However though, they got something in their hearts and minds on where the band would go forward into. All in all, this is a very interesting country-folk rock album from start to finish and it’s pretty good.
Posted by znathanson at 10:36 PM