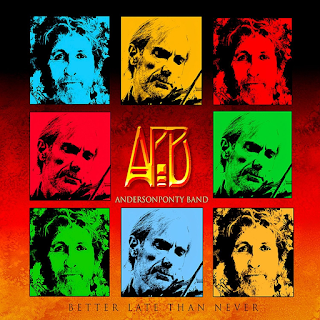 It seems like an interesting yet unexpected idea for a collaboration. The heart and soul vocalist of Yes meets the fusional violinist from his work with Frank Zappa and the Mahavishnu Orchestra. Jon Anderson and Jean-Luc Ponty is perhaps one of the most creative ideas to come around when they collaborate and the magic is spot-on. That and the CD/DVD release of their live album entitle, Better Late Than Never shows the Anderson Ponty Band at their finest.

They recorded the show in Aspen, Colorado at the Wheeler Opera House on September 20th of last year in which they gave their first public performance. When you listen and watch both the CD and the DVD, you can imagine yourself being at the Opera House being very interested of listening to both the re-imaginations of the Yes songs that they do along with the band. The band considers; Baron Browne on Bass, Jamie Glaser on Guitar, Wally Minko on Keyboards, and Rayford Griffin on Drums and Percussion.

There are 14 tracks on the CD and 10 on the DVD in which you can see or listen to the entire show in your own living room. Ponty brings color and joy on his violin. And when you listen to his improvisation on Owner of a Lonely Heart, he’s nailing down through the groove as Jon is shining through his vocals. And while it may not be as it was in the golden-era, he still has it.

The reggae homage to Bob Marley, seems very much it could work on paper, and it interestingly does with the groove-vibrations on Time and a Word. Browne’s Bass and Minko’s Keyboards in the style of both Organ and Fender Rhodes, has a reggae-funk type of rhythm and you can imagine the audience nodding their heads and tapping their feet and dancing with the sound. Not to mention that little touch of the Beatles She Loves You thrown in for a couple of seconds.

The ambient/atmospheric ascends into a soaring sky as the band go into adventurous worlds with the dramatic turned almost bossa-nova/calypso feel on Infinite Mirage and the relaxation of A for Aria, it helps the Anderson Ponty Band a chance to relax and help the crowd get into the calming mood. Which is moving into a Jazzier tradition in the styles of Wonderous Stories.

Minko is capturing the sounds of both Thelonious Monk and Keith Tippett as he along with Baron, and Rayford lay down the groove for a Classical-Jazz walk into the sunset followed by the scatting vocals that Anderson does and Jean helping out with him to follow his improvisations on his violin. But Ponty nails it down. He lays down his chops to give the band a chance to go into the road with a blistering sun-rising adventure with an orchestral touch on Renaissance of the Sun.

But I love their take of Yes’ Roundabout. It’s in a different tuning, but done in the style as if both the group and the Mahavishnu Orchestra had recorded this composition for the Trident Studio Sessions and having a blast together and Zappa conducting them to see where they will go into next.

I really had a blast listening to Better Late Than Never. Even though I admire both the essence of Yes, Zappa, and Mahavishnu, I could tell they hit a home run with the audience and just in awe of the two combinations which is unexpected, but fitting well. They are planning to go on tour in the States starting on Tuesday October 27th in Glenside, Pennsylvania which is a suburb part of Philadelphia at the Keswick Theater.


So if you love the sounds I’ve mentioned, then be prepare to enjoy and experience the music of the Anderson Ponty Band.
Posted by znathanson at 2:43 PM