The Hillinoise - My Sleeping Butterfly 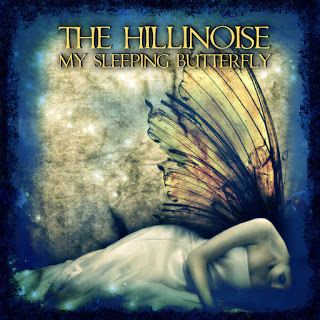 The Hillinoise formed three years ago in their hometown in Potenza, Italy. They are an Alternative/Gothic Rock band that has a darker and intense groundwork they have in their music. Melodic melodies about alienation and isolation thanks to the vocals by Daniela Stefanelli, it hits you hard in the heart on the lyrics that almost hits home.

Alongside Daniela’s vocals, the Hillinoise also considers; Rocco Emanuele Gugliemi on Guitars, Gianluca Falasca on Drums, and Marco Evangelista on Bass. This is their second EP released on the My Kingdom Music sub-label, Club Inferno, entitled, My Sleeping Butterfly. The rhythm is laid-back, haunting and sublime in the essence of The Gathering and A Perfect Circle rolled up into a blender.

And the combination of the two mixes in well for the beautiful touches that it is on the table. Opener, Lighter starts the EP off with a haunting waltz in the gothic structure. It has clean rhythm guitars, soothing bass lines, and laid-back and mid-tempo drum beats that go through a major and minor chord structure as they follow Dana’s voice through the measures and wherever she goes, they follow her to stay on top.

Nymphetamine gives Marco’s bass to move in front.  He brings a lot of the heavier tones on his instrument followed by Rocco’s clean/hard guitar riffs that gives it the ominous vibrations throughout the composition. Energetic and in your face, this is a knockout. And The Hillinoise really has brought in a lot of power to the second track and on to the closing track, Sleeping Beauty.


WIth 5 minutes and 58 seconds of a dosage of Prog-Goth music like no other, they really nailed it on this piece. And I could imagine Daniela’s voice captures the essence at times of a darker version Anne-Marie Helder from Panic Room and Amanda Somerville, but it nails it spot on to close the EP off.