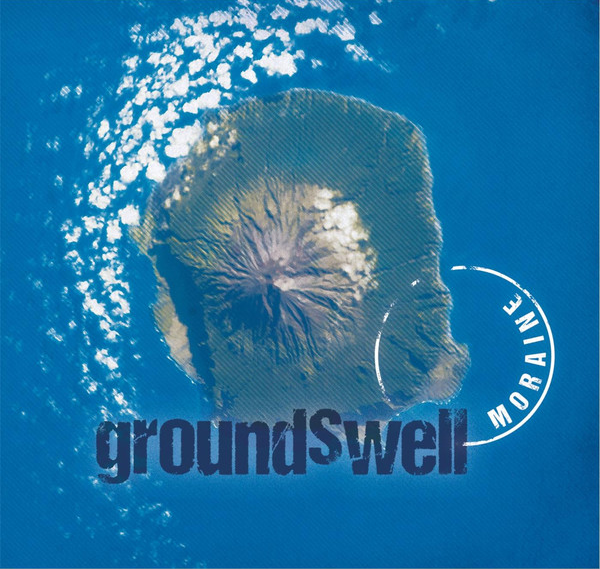 Moraine has for me, one of my favorite Progressive/Jazz-Rock bands from the Moonjune label since listening of both of their two albums including their live album in which they did a performance back at NEARFest four years ago with Metamorphic Destiny, and their debut album, released in 2009, Manifest Destiny. They always bring this touch of bringing both of these genres and take it into a different area with their music and the power of those five people they can do no wrong for me. That and their new follow up, Groundswell, show that Moraine is back in action and taking it one step further.

Gnashville starts off with a sliding guitar introduction done by Dennis Rea as if he’s paying homage to Ry Cooder with a heavy bluesy twist as James and Alicia DeJoie go into town playing the melody on Bartione Sax and Electric Violin. But it’s Alicia taking center stage on her violin as she is going into an eruptive workout on her instrument by paying tribute to King Crimson’s David Cross and High Tide/Hawkwind’s Simon House by going maximum speed before Rea is revved for a solo to take into driven force thanks to newcomer on the drums Tom Zgonc. Not to mention the band’s six centerpieces that will make you know that Moraine are in action.

Opener, Mustardseed is where the album starts off with its stick bass introduction done by Kevin Millard before James, Alicia, and Tom come in with a moody jazz vibe that is reminiscent of Steven Wilson’s Grace for Drowning-era before it goes into an insane avant-rock territory with an electronic haywire effect that Alicia does on her violin to give it that twisted jolt. Elsewhere, Fountain of Euthanasia carries the spirit of the Rock in Opposition movement as the band goes into with a Roger Trigaux twist at the end while Synecdocke shows the golden era of the beginning of 1970 with an ominous rumble jazz nightmarish feel.

It starts with this post-rock late ‘70s feel between Keith Millard’s stick bass lines along with Rea’s chaotic guitar intro before it goes down to business as Dennis, James, Alicia, and Tom come into the circle and it’s a touch of Beefheart-meets-Crimson-meets-Miles Davis combination of the three as they swirl into taking turns on the solos and it’s a conquering stunner touch and not to mention the two time changes they go into.

The inspirations of the music from Asia, is a perfect evidential fit. On, In That Distant Place, is Dennis’ tribute of traditional music in which it was on his solo album, Views from Chicheng Precipice, but on the fifth track, it is very relaxed and comforted to give Moraine a chance to lay back on the heavy material as if Dennis is telling the band, “Let’s put the harder stuff aside now and lets have a chance to go into a pleasing atmosphere.”

Kevin and James do this amazing improve melody between each other on the Stick Bass and Flute along with Zgonc’s drums to create this Van Der Graaf Generator-sque intro on Spiritual Gatecrasher they do to create the tension on here. You can imagine parts of the pieces that could have been used during the sessions for Pawn Hearts as the monster-like roaring chords that Rea does captures the keg ready to explode at any second as if the beast has unleashed its cage and reigning attack, but James captures the Flute with a lot of insane movements as if he is channeling both David Jackson and Mel Collins.

I had a complete blast listening to Moraine’s Groundswell. It really shows that Moraine have brought a lot on what was on the list to bring into the sessions for the album and its eruptive, mind-blowing, challenging, and seeing what is going to happen next in the years to come. A big hats off to Moonjune Records for a job well done.
Posted by znathanson at 10:11 PM

Excellent Thank for the heads up !