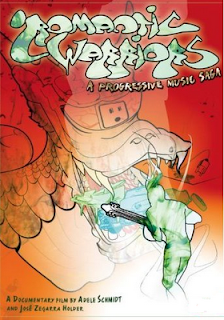 It’s been a while since there has been a documentary on the genre of Progressive Rock. There had been some sort of a mini documentary that the BBC did including the top ten Prog Rock bands recorded back in 2001 hosted by comedian and Prog fan, Bill Bailey. And another one back in 2009 where the Britannia scene of the Prog genre raging from bands like; ELP, Genesis, Yes, King Crimson, Soft Machine, and Caravan to name a few. When you hear the phrase, “Documentaries”, you think of people like The Maysles Brothers, D.A. Pennebaker, or Murray Lerner to name a few. However, one of the most interesting documentaries I’ve seen is a movie called, Romantic Warriors: A Progressive Music Saga.

Directed by Adele Schmidt and Jose Zegarra Holder, who’ve filmed in the East Coast area of the States back in 2009 shows the cities of; Gettysburg, Bethlehem, Chapel Hill, and Baltimore, four of the cities in which they do Prog Festivals from ProgDay, RoSFest, and the festival of all festivals, NearFest, in which it is in its series finale to close the year off in 2012. Ignored by the so-called rock critics and today’s music industry, the Prog genre could never die. With the help of the internet, YouTube, and online stores including the Laser’s Edge, Wayside Music, and Syn-Phonic Music to name a few, have shown that the Prog sound isn’t dead, it just keeps growing, and these up-and-coming bands to follow in the footsteps of the bands in the ‘70s, shows that they not just love the music, but they have shown the passion and the enjoyment that these bands to create their own technique.

Bands and artists featured in the documentary are; Deluge Grander, Cabezas De Cera, Phideaux Xavier, D.F.A, Cheer-Accident, and La Maschera Di Cera to name a few, captures some of the performances that they did in the festivals that are Close to the Edge. Cabezas De Cera, from Mexico, has this middle-eastern atmospheric rock sound in World Music, will take your breath away while Italian band, D.F.A, show their love of Canterbury Jazz Scene of the late ‘60s and the golden era of the 1970s, however it is the dynamic Pronk Avant-Garde roar of Cheer-Accident’s performance at Orion Studios, will remind listeners of King Crimson’s Red period.

I have watched this documentary about 17 times already on DVD and I’m completely blown away by how not only the Schmidt and Holder have done their homework well, but showing how Prog can take the old and young generation of people to understand this is a genre that keeps on truckin and there is not a single stop sign anywhere for them. Not to mention some interviews from fans and musicians including Phideaux Xavier, Gary Green from Gentle Giant (featuring amazing rare footage of the band performing in Germany), Roine Stolt, Paul Sears, and the master of Orion Sound Studios, Mike Potter, sharing their view on the present and the future of Progressive Music.

And now Schmidt and Holder are in working mode to finish up the follow up in which they cover the Rock in Opposition scene in Europe. Let’s see what they have up their sleeve for this year in 2012 to have their full and honor support of Prog and RIO.
Posted by znathanson at 4:21 PM