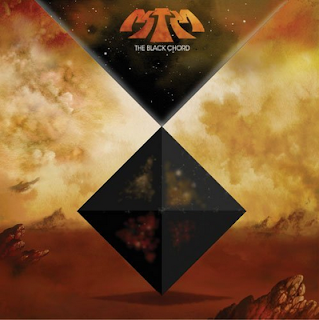 San Diego’s own Astra has been pretty busy for three years lately. The last time we heard back from them, was in 2009 when they released their explosive debut album, The Weirding, and it received word of mouth and glowing reviews from MOJO, Record Collector, and Classic Rock Presents Prog and received warm receptions at Prog Festivals and small venues in the States and in Europe and they have finally are taking the Progressive Music genre up a notch.

Now in the year of our lord 2012, it seems that Astra have now come in full circle with the follow up album, The Black Chord it still shows the band have brought a lot of production, time, and effort to come up with the most mind-boggling and volcanic beauty like you’ve never heard it before. And while the cover of the album looks like something that was from 1973, the music itself is sinister, haunting, terrifying, and yet overwhelming that would have been done as a score for a Ken Russell film.

The music from beginning, middle, and end sends you, the listener on a roller-coaster ride of terror like you’ve never witnessed before. Example of it is the blistering opening 8-minute epic instrumental, Cocoon that starts the album off as a dynamite going out in the middle of nowhere as shrieking guitar feedbacks, Mellotron swooshing, ARP Odyssey’s going “Screech!”, and then it becomes a free-for-all as Brian Ellis, David Hurley, Conor Riley, and Richard Vaughan duke it out as the tension and drama fill up the atmosphere to make you get ready for an adventure that you’ve never seen before.

Then it’s a spiritual journey with the 14-minute title track that becomes a dazzling jam session nightmare filled with the void of early Premiata Forneria Marconi and the Lizard-era of King Crimson. The title goes through a mourning atmosphere as the Mellotron goes through sounds of the Organ, Brass, and the String quartet as it goes through a melodic gentle crisp sunny day as they clash through a lot of the thunderstorm clashes of both instruments as the last 3 minutes of the piece go into a haywire mode that is jaw dropping.

Astra has now shown proof that they never made a bad album and even though the Prog genre in the 21st century has shown a lot of the revival, the sound that they do makes you feel that they have done their homework and know their Prog sound very well! While there’s mixed opinions about them, they have stayed grounded to make sure the arranging and compositions have a lot of air and staying true to the ‘70s roots.

Drift shows the emotional sound to a T. With a touch of the Trilogy-era of ELP and Rick Wakeman’s Journey to the Centre of the Earth, the band goes through an acid folk moogfest with the mellotron filling the way to follow your dreams according to the song. It is a wonderful flowing calm after the storm, Astra makes sure they don’t miss a beat and making sure the grandfathers of Prog have finally given them 100% credit on their final exam.

The finale, Barefoot in the Head, has the Space Rock sound that sets the tone to close the curtain. I could tell they were watching Kubrick’s 2001: A Space Odyseey and the Tom Baker-era of Doctor Who and wrote this Sci-Fi mini rock opera that takes the tension between keyboard, drums, and guitar to a different level on the rhythm section. While the sounds of ‘70s Italian Prog, King Crimson, Pink Floyd, and early Genesis are in there, Astra have now taken the Prog torch up to the Olympics to light it and watch the flame go in and burn in the night-like sky.

The Black Chord is a wonderful and dangerous album to listen to. It is wonderful and secret to make you want to play it over and over again. Astra show no sign of stopping, and even though they have a long way to go, this follow up is hard to describe and the sound and music is obscure, vicious, and impressively Doom Prog like no other.

Posted by znathanson at 6:32 PM

A very impressive article. Well prepared. Very motivating!! Set off on to way