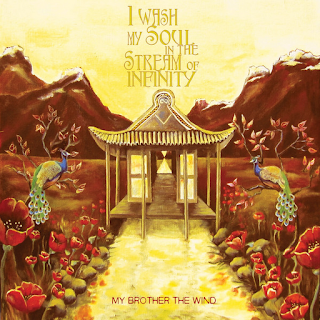 Formed in 2009, My Brother the Wind features Nicklas Barker, Mathias Danielsson, and Ronny Eriksson and his brother Tomas, decided to create this mythical yet strange musical atmospheric landscape that some of the prog and experimental bands were doing then back in the 1970s, and in the 21st century, are following in the footsteps and passing the torch to them. The band pay homage to the Space Rock sounds of early Floyd and Krautrocker’s Ash Ra Tempel and early Tangerine Dream as they would take the sounds by making their own soundtrack of the future.

The sound of My Brother the Wind is more of a mystical yet touch of 70s prog rock as they went back and listen to some of the music for research before making a touch of soothing yet dramatic work that would send a shiver down your spine. Even though the band have put two albums in the can, they could take the Prog-Rock structures with an eruption so big, you would definitely have a psychedelic freak out session that could almost make it as a double album and last throughout from dusk till dawn.

Like the Space Rock/Atmospheric Experimental twist that would give goosebumps to the listener, they could almost could have wrote the entire album as a film score to one of Ralph Bakshi’s The Lord of the Rings back in 1978 and would have made it a cult classic with the wonderful sound and psychedelic sessions that would have made the film and music lovers jaw dropped. Starting off with the dooming session of the utopian world gone wrong on the 13-minute Fire! Fire!! Begins with the guitars and drums going haywire in a crescendo including a wall of feedback, it goes into the futuristic adventure through time and space with both of the guitar players paying tribute to Manuel Gottsching and Dave Brock also features a mellotron to set the roller-coaster ride off with a bang.

Meanwhile, Pagan Moonbeam has this melodic yet haunting raga-rock sound featuring the sitar and Ronny Eriksson’s spooky organ sound, makes it sound like 1968 all over again. You have to give credit for Nicklas Barker, because he’s not doing this for the money, he’s doing this because he wants to do other things like film scores and working with other artists alongside Anekdoten.

The delivery on The Mediator Between Head and Hands Must Be the Heart which features Nick, Tomas, and Ronny doing a terrifying composition that almost could have been a part of the El Ultimo sessions. Featuring a wah-wah bass solo, dooming mellotron work, Fripp-sque guitar work, and Tomas’s drumming is jazzy and almost sounding like a machine gun, makes you begin to realize that these men have done their homework very well.

The 10-minute pieces of Torbjorn Abelli (who was a bassist for this band called International Harvester back in the late ‘60s, passed away back in 2010) is a mourning egyptian rock beauty as Under Crimson Skies, makes some very good moves of ‘70s guitar groove jam sounds between Nicklas and Mathias Danielsson taking their tribute to King Crimson a step further into the voyages in the milky way. Meanwhile, the closing title track, is one of the most laid-back sounds that has this guitar layered and keyboard scenery that reminisces of the Phaedra period that makes you feel you are home back on earth and relaxing at home.
Posted by znathanson at 4:25 PM