Asgard - In The Realm of Asgard 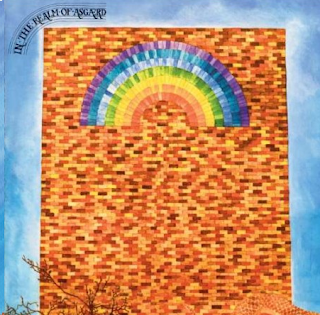 Originally released on the Moody Blues label, Threshold back in 1972 and restored by Esoteric Recordings, Asgard’s only debut album, In The Realm of Asgard is one of the most underrated albums in the history of Progressive Rock and almost one of those lost treasures that never got any recognition after Threshold decided to focus on the Moody Blues music in ’73. The concept inspiration came from the brainchild of Rodney Harrison who wrote the lyrics and was heavily influenced by Tolkien’s Lord of the Rings trilogy as it shows here that he was no show off, but really pulling it off.

The sound of Asgard’s music has a combination of Folk, Hard Rock, Celtic, and Experimental with a nice eerie violin sound as if they could have been listening to High Tide’s Sea Shanties and Barclay James Harvest’s Once Again to come up with the sound and the direction they were going in. The band was brought to attention by Moody Blues keyboardist Mike Pinder who brought them to Threshold and got them to a deal to record an album, but with help from the late Tony Clarke, it would be a perfect combination.

The band considered Rodney Harrison on Guitar and Lead Vocals, Dave Cook on Bass, Ian Snow on drums, James Smith and Ted Bartlett on Vocals, and Peter Orgill on violin who could have been the answer to Simon House and David Cross. The band used a lot of the story complex songs that had been evidential on the swarming title track, the upbeat Town Crier, and the rise and fall of a Victorian leader on Austin Osman Spare that adds some dramatic structures between Rodney’s lead guitar sound and Orgill’s haunting violin work setting the scenery of the late 1890s in England.

It’s hard to believe that Asgard released their only album. When the album was released in that same year, it didn’t do well because The Moody Blues were focusing on trying to deal with other bands and artists who were signed to Threshold to get them promoted and see the light at the end of tunnel. The album itself was completely ahead of its time and the structures and many years later, prog fans have finally considered this an obscure classic and should have gotten a lot of attention it deserve.

Even though they were signed to Threshold, The Moody Blues themselves found out that having their own record label was difficult and hard to be in. One of the most psyched out twist that is on here is the psyched turned Irish jig rock dance along piece is Time through Rodney’s lines and Orgill just coming up with some country dance swing on the violin to get into the groove as the closing track, Starquest, has an acoustic space folk rock adventure that could have been straight out of a Philip K. Dick short story with vicious guitar licks, swooshing moog for the beginning, acoustic jingle dueling with electric is a sci-fi rock opera like no other.
Posted by znathanson at 12:00 PM