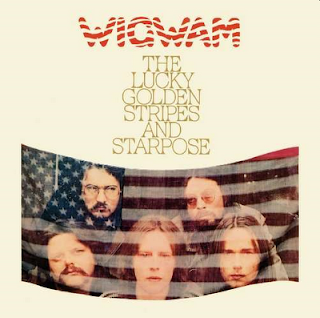 “Happy face human race/swinging in the rain/ get yer rags together ‘cos/we’re going down the lane.” Those words are magic geniuses thanks to Finland’s own Wigwam. After having success with their previous album, Nuclear Nightclub, some of the critics believed that Wigwam were about to follow in the right footsteps. But it wasn’t going to be that easy as they went commercial which wasn’t a bad idea for them to do when they released, The Lucky Golden Stripes and Starpose in 1976.

The band was signed to Richard Branson’s label, Virgin Records and recorded the album at the Manor in Oxfordshire in January. They finally hit the mainstream which had mixed opinions from the music critics at the time the album was released. It was ahead of its time, but The Lucky Golden Stripes is one of those albums that still sound like a cleanly fresh jewel that you haven’t wore for 34 years and Wigwam’s ninth album is one of them.

The tracks on the album were written by leader of Wigwam, pianist and lead vocalist, Jim Pembroke starting off with the lifting introduction about being free from the mental asylum and starting a new life on Sane Again while International Disaster carries in the realm of The Band’s Stage Fright-era. The short instrumental composition, Timedance, is basically an improvisation that has a Gentle Giant feel thanks to Hessu Hietanen’s homage to Kerry Minnear. It is very short, but it is almost like a jam session between drummer Ronnie Osterberg, Hietanen, and guitarist Pekka Rechardt creating some jazzy funk with an attitude.

The 6-minute epic, Colossus starts off with Pekka creating a mystic guitar rhythm as it segues with Hessu doing an atmospheric style on the keyboards. Then it becomes a driving rock beat as the tempo begins to reach the higher ground. There’s a lot of the Fusion-esque sound that you could hear more of that with Return to Forever and Weather Report, but the track still is carrying the layered ethic touch to the sound of Wigwam and Pekka is unbelievable on the guitar and he deserves 100% credit on this track. Elsewhere, Eddie and the Boys is very more pop-orientated than Album-Orientated Rock. This was the band’s beginnings of going commercial. While some of the fans have a hard time to love or reject this track, Rechardt is really going to town with this on his funk-like sounds on his guitar.

But on Lucky Golden Stripes and Starpose, it has more of the progressive feel on the beat and changes. Pekka is again just shining by doing a space rock sound on the guitar in the midsection while Osterberg is working on the drums carefully like a real jazz-drummer and Hessu’s keyboards has a very haunting overtone and then it goes back into the rock sound to close the track up as if Jim’s vocals and Mosse Groundstorem’s bass lines that have more the funk beats than Pastorious if you like during the short complex midsection.

June May Be Too Late is Pembroke’s homage to the Soul sound representing the Motown sound in Detroit but with a Soul Train attitude. There’s some shuffles and cool riffs between each instrument that you would be blown away by. You can imagine Don Corneilus bringing this band to his show and the audience being blown away by them and seeing how damn good they are. You won’t hear a damn disco feel on this, but more with the sound of soul, it really has the train pumping out the music.

The partnership between Pembroke and Rechardt are sort of Finland’s answer to Lennon and McCartney (in a Prog-Fusion style of the Beatles) on the soothing crystal ballad on Never Turn You In as the final track, In a Nutshell, a glorified progtastic opium in the realm of Frank Zappa’s One Size Fits All-era. It’s a bag filled with: Pembroke singing the melody as if he’s doing the time changes with the instruments in a spoken word-rap feel as Hessu, Pekka, Mosse, and Ronnie create a humorous fusion finale that is sometimes quirky and in the realm of Camel’s Moonmadness at times. The two bonus tracks which are featured on the Esoteric reissue which were recorded in Stockholm and Kingsway Studio in 1975.

Tramdriver could have been recorded in the sessions of Fairyport while Wardance has a mystical yet eerie upbeat tempo provides so much of the jazz fusion and conceptual ideas of the Blue Moon and the Twilight sky for a dance beat. Lucky Golden Stripes and Starpose may not be everyone’s cup of tea, but it’s not only an incredible album, but it’s a shame that the album would divide the fans and critics like drawing a line in the sand whether to accept the album or not.
Posted by znathanson at 9:56 PM