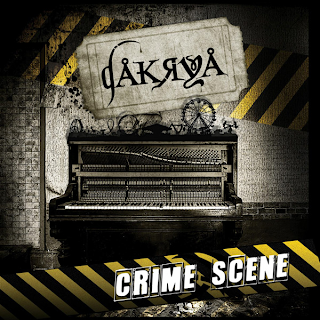 Those who are looking for an adventure of theatrical stories and the avant-garde scene from Greek’s Experimental up-and-coming band Dakrya will take a huge approach to start in their follow up adventures in the territory of Progressive Metal in their second album, Crime Scene. The album cover features the piano as a cover-up as evidence on top of the piano is a small yet eerie amusement park that is emptied and no one there which the listener might get the feeling that something has gone horribly wrong. This is an album that will scare the living shit out of you and it is perfect to be a special trick-or-treat celebration for Halloween.

Opening number, The Charlatans is a real operatic force. In this number, Dakrya are in the mind world of Goth, Theatre, and a twisted version of Within Temptation meets a theatrical version of Aphrodite’s Child’s 666, but with this militant carousel rocker, it’s all very much a disturbing children’s fairy tale that is mind-blowing, albeit with time signature of experimental metal. Probably one of the most weirdest songs yet it’s fun and joyful to listen to. Blind Man’s Bluff starts off with a quirky amusement park organ introduction as it transforms a disturbing glow between chugging guitars, machine gun sounds of the drum, walking bass line, death cookie-monster vocals, with a little help from two female vocalists Christina Kalantzi and Thomais Chatzigianni who would have been a Kid Sister of Tarja and Sharon Den Adel. There’s been a love/hate relationship of Female fronted metal bands, but Dakrya, the magic is there and the duo vocalists work together as a team. It’s very twisted and works like a charm with the Art Metal sound.

Which leads into Scaremongering, which features SophiaX’s dooming piano concerto Alex Drake’s fuzzy bass introduction and then turned into a headbanging adventure as George Droulias represents a circus presenter to the murder scene, you can tell that this is something Vangelis, Demis and Lukas would have appreciated and put on their next album that could have been a sequel to infamous concept album. The swinging yet homage to the 1930’s jazz scene thanks to Sophia’s crazy piano work and George’s raw guitar sound and death metal vocals on The Urban Tribe fits the atmosphere in Dakrya’s world of art theatre. As for Camouflage which is back into the nightclub jazz scene as if its set in the darker amusement park as the performers come up with exotic dances for the group rumbles of psychopathic roars.

Phantasmagoria, which is an homage to Lewis Carroll, recalls a freak show resembling to Tod Browning’s controversial cult 1932 classic Freaks as if it’s a rock opera turned into a shattering composition as hissing vocals and middle-eastern guitar beats fill the atmosphere while the homage to Bigelf’s Cheat The Gallows of Inertia thunderstorms through a swirling pool of terror before the climatic horror show that it is out of this world. The 6-minute Dramatis Personae musical layered of the haunting sound from the duo and George enjoying together as they do a dance for Oscar Wilde with a set of performing music for him and writing a composition for The Picture of Dorian Gray before closing the album with an instrumental twist of piano and bass going haywire with A Dreadful Side Scene. Which is a perfect ending to the album to keep your blood flowing for Dakrya’s next adventure of the theatrics and who knows which road will lay ahead for them and rest assured, the journey has just begun.
Posted by znathanson at 6:14 PM