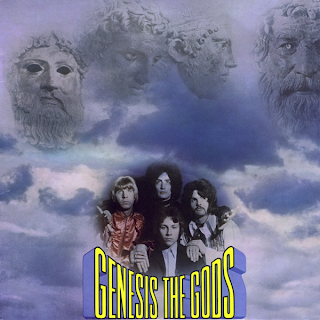 Often as regarded for the blueprint for Uriah Heep and thanks to the presence of former Rolling Stones guitarist Mick Taylor, The Gods was a band with a psychedelic flavor to offer rather than being a giant sound of prog arena rock. And their debut album, Genesis, released in 1969, is a fascinating work blending with Beatlesque lyrics lurking with the Psych-Pop sound meets The Piper at the Gates of Dawn-era and a flair of soaring organ sounds thanks to Ken Hensley’s compositions to the tone with a bit of Avant-Garde chipmunk voices to help out at the end.

Formed in 1965, they started as schoolmates in Hatfield and soon opened for Cream combining love-song lyrics and picking interesting covers they worked on. Can you imagine Paul McCartney giving the band, Hey Bulldog as a single for the movie, Yellow Submarine? Not only did The Gods did a remarkable job capturing the spirit of the song, but the result is magnificent and very wonderful – they would have made the hippies at Woodstock go batshit crazy of melodic wonderous flaming fire as Ken Hensley unleashes a pounding piano work that have expected from The Beatles surprised reaction along with adding a horn section by making it pastoral, you got yourself a weekend. But this is the complete measure from the band’s talent – they could have been signed to Apple Records, but here on Genesis, it’s all here as evidential proof from start to finish.

However on the reissue released sixteen years ago on the Repertoire label, it proves that The Gods weren’t just the turning point for Ken Hensley. The band features – John Glascock (Carmen, Jethro Tull) on Bass Guitar, Lee Kerslake (Uriah Heep, Toe Fat) on drums, and Joe Konas on guitar and vocals. The opening track, Towards The Skies, is very aggressive done by Ken’s organ work and Lee’s rumbling drum work as it features dazzling guitar work in the rein of Hendrix meets The Move with a lot of heavy grooves to fill the atmosphere while the mellowing mellotron dreamland beauty of Candles Getting Shorter represents the balladry of Procol Harum’s self-titled debut album.

You’re My Life is very much proto-hard rock as Joe Konas does some crazy guitar solo as if he was Ritchie Blackmore while Lee battles with him on the drums as they look at each other to see who can create the best composition work they would do. On eerie numbers such as Looking Glass, The Gods almost could have recorded this album with Bo Hansson and Janne Karlsson (or maybe an early version of Spooky Tooth thanks to the falsetto vocals and disturbing numbers) than becoming the best band in the beginnings of Progressive Metal they are with Uriah Heep as if Lewis Carroll would have lived, he would have written lyrics for them

Misleading Colours is in the realm of the west coast sound of the psychedelic scene of the U.S. mostly almost a sequel to Hendrix’s Purple Haze, but with a vengeance thanks to wild guitar and organ sound as they do some Psych-blues in the midsection. Radio Show is a driving rocker, thanks to Ken Hensley’s upbeat sound as he would do with Uriah Heep. The song has a horn section, pop lyrical background in the realm of the Revolver-era, time signature changes the arrangement, but it’s very much something that The Beatles could have worked on.

Ken Hensley takes the microphone as he sings in a mournful beauty with the somber uplifting number, Plastic Horizon. It has the disturbing tones that Hensley does with the organ and adding a lot of his harmonic vocalization and you could feel that he’s written the score for Michelangelo Antonioni’s Zabriskie Point. Farthing Man is another upbeat number with a lot of the harmonic vocals in the background and pop melodies while the guitar comes into play with a lot of psych-work and making it one of the most unbelievable numbers out there. The title sounds very Dr. Seuss in a comic book type of way, but it fits perfectly.

I Never Knew, is the 5-minute epic and making it very Prog-Psych thanks to the fairy tale lyrics, sweet mellotron string sounds, vibrative organ works, and excellent rhythm section to make it twisted and mind-boggling as the guitar solo comes back into the frame to close the track with a vengeance while the finale, Time and Eternity, ends with a heavy metal psychedelic romper. The guitar rhythm, drums, and organ, including a la-la section makes the band sound like if they could have been in Roger Chapman’s Family.

The bonus tracks feature the eerie psych vibration of Somewhere in the Street, the pastoral version of the Beatles (before they recorded their version) Hey Bulldog, and harmonica blues rock in the style of Them meets Cream on Real Love Guaranteed. Genesis is an essential lost underground psychedelic album that deserves attention and offers the beginnings of Uriah Heep.
Posted by znathanson at 9:08 PM

Hi Zachary, I just came across your blog and would like to thank you for the wonderful write up. It was very enjoyable to read and you certainly know your music. If your into that era of music check me out on face book for photos' of the Gods and other artists of that era.
Cheers Mate!!
Joe Konas

Hi Zack, I just came across your blog and you did a wonderful review on the Gods. It was very enjoyable to read what you wrote and it is appreciated. I can see that your into the music from that era, if you wish check out my face book page. I have pics of myself and Ken Hensley and the boys at EMI Abbey Rd.
Cheers Mate!!
Joe Konas