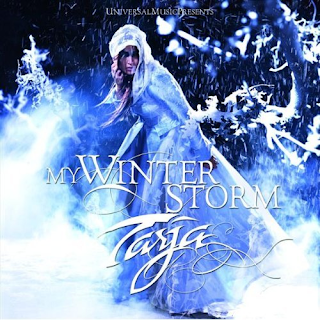 Finland’s female operatic vocals and the answer to Roger Waters, Tarja Turunen is considered one of the most magnificent vocalist to come out the Symphonic Metal background. After only five albums with Nightwish, she was sacked in 2005 due to creative differences and controlling issues. It was not the smartest thing for the band to do, but they decided to move on with another singer.

But it’s not the end for Tarja Turunen. It was hard for her to accept the fact that being fired from Nightwish was tough, but it gave her an idea on where the direction she would lead in her solo career. It’s very difficult to have controversial debates on Forums, YouTube and Facebook with the bullshit of Anette vs Tarja nonsense by the so-called Nightwish fans to decide who is better. And it surely letting Tarja know that she’s back with vengeance and letting the assholes to tell them to shut the fuck up and let me say it’s very special.

And it just keeps processing power. Take a huge listen to her second album, My Winter Storm and it took me by surprise on the interest on my iPod and in my iTunes library, and not only the songs are brilliant, but the orchestral rock sounds added a lot of strength to the music in which Tarja is doing right now. The melodies, compositions, and a cover of Alice Cooper’s Poison, it just goes to show how Tarja can really push the envelope a bit further before the points can come in to see how well she deserved to give us a huge returning experience and a strong touch of the horror scene. A representative of Andrew Lloyd Webber meets Within Temptation meets Amberian Dawn is a huge combination these days.

But don’t be fooled that it’s not a pop and alternative rock album. Besides Within Temptation’s The Silent Force is very much an alternative rock album at times and it remains a favorite of mine as for me being considered a Symphonic Metal with Female Vocals type of guy. As for the operatic metal sounds on Epica’s The Phantom Agony, this here is the shit and with a length of attitude with some singles that will have your mouths watery.

Look at the influences she grew up listening to – Sarah Brightman, Peter Gabriel, Alice Cooper, Roger Waters, Richard Wagner, and dare I say The Three Tenors – is a good structure to have your apples and oranges to eat for dinner, but the concept on My Winter Storm, almost provided a live performance at the Royal Albert Hall with well used ideas that she brainstormed by the time she was working on her debut album. Opening segues of Ite, Missa Est has a strong connection of Amadeus as the single driven beauty of I Walk Alone, throbs with the kind of gothic background connection of Edgar Allen Poe vibe has a huge effect in the Wagner meets Metal, the eerie Lost Northern Star whirlpools of the heavy guitar driven dalek melodies that would have made Metallica and Tool write a song like this for an orchestra not to mention a strong connection of Gustav Holst’s Mars, The Bringer of War in there.

Meanwhile, The Reign, My Little Phoenix, and Boy and the Ghost shows proof that Tarja can sing like an Angel that has a mourning aftermath, sinister little girl, and an homage to Guillermo Del Toro’s The Devil’s Backbone can prove that she can write a score for an epic film set to majestic music. She is the composer, conductor and singer and can definitely win an Independent Spirit Award for Best Score and give the Academy Awards the middle finger. While this is going on, the haunting chant introduction turned into a heartfelt ballad on Sing For Me could have been written for the video game, Dante’s Inferno or God of War III with a guitar and symphonic driven force and it proves that Turunen can go from Opera to a goddess to put an end of the war that Alighieri must face to find his love, Beatrice.

Oasis starts off with a funeral bell-like sound and then turned into sadness that has a Celtic background and you can tell that she did a lot of research to hear different music from the outer world in Europe as she does this wonderful vocalization that is so damn good, it could have been used for the Lord of the Rings trilogy while her take on Alice Cooper’s Poison sounds very much as if it was recorded in 1987. But with an electronic style to pay tribute to the king of Shock Rock, she wanted to capture the spirit of Cooper’s beauty along with a screeching electric violin style with a mechanic structure to it. Our Great Divide filters between drums and a string quartet that gives it an embellished role as Damned and Divide is as much a filtered version of Dream Theater with a rumbling metallic art feel.

By comparison, Die Alive is her tribute to the Progressive Metal sound. To more of the guitar driven sound, keyboards flourishing, and Mike Portnoy drum sounds as Tarja sings about sacrifice to die in a blaze of glory rather than dying as a punk in the battlefield which is very much a militant symphonic rumbling that is desperate to be a part of a dramatic trailer. The ballad is back again with the emotional violin and piano compositions as you can see Tarja dressed up in her white gown barefooted walking into the snowy forest wearing the make-up in the style of her hero Peter Gabriel as she sings up to the sky at the gods singing Minor Heaven.

The rattling yet screeching Pantera driven homage on Ciarian’s Well is filled with a Dimebag Darrell guitar stabs, fast drum sounds like a machine gun flying bullets off the wall, and Tarja singing like a demon as if it was like hell on wheels. Her style and her scream at the beginning, is very jaw dropping and the symbolic of in your face symphonic metal. The closer, acoustic classical guitar style in the mind of Steve Hackett on Calling Grace is another of the Celtic sound. It has the early Genesis lyrics, but its lyrics and almost set in an English countryside is structured very well, closing the album to a T. The bonus live tracks are quite interesting.

You Would Have Loved This has a lot of the Andrew Lloyd Webber influences as if it was left during the sessions of his broadway musical for The Phantom of the Opera while the dazzling live version of Damned and Divine brings the roof down to the Nightwish fans like a bat out of hell. Cross your fingers to the sound of Tarja’s return and you’ll buy this as if she’s coming back from the dead. Like fellow symphonic metal up comers Amberian Dawn, Turunen brings the genre to the core of operatic rock and arrangements, like you’ve never heard it before.
Posted by znathanson at 11:22 PM