Rush - Beyond The Lighted Stage 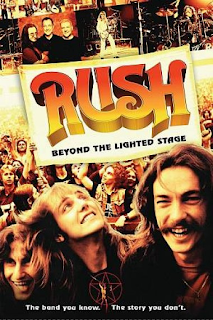 It’s impossible to say why Rush are one of the most influential cult bands to come out of Canada since 1974. The title is named after their song Limelight from their classic album, Moving Pictures – the song deals with being the center of attention and putting aside the alienation. For drummer Neil Peart, being a private guy is very understandable and his situation to go inside his life is not a good situation. But for the Camera eye, they finally decided to open the door for us to see their true story from living in the Suburbs in the Canadian circuit to being one of the most important bands of the decade.

As the restaurant menu comes in and breakfast, lunch, and dinner are getting ready to be prepared for us to eat and enjoy. Alex Lifeson and Geddy Lee along with Neil are the Three Stooges. Lifeson comes up with more comedic humor before going to have dinner with Neil, “What’s the motivation to keep doing it? Chicks!, “Who’s Going To Clean These Typewriters?! ” and “I quit the fucking stupid band!” You can tell they are having one hell of a time making fun of each other. After filmmakers Sam Dunn and Scot McFayden already achieved documentary success at film festivals including; Metal: A Headbanger’s Journey, Global Metal, and Iron Maiden: Flight 666 (a documentary about the band’s Somewhere Back in Time World Tour in 2008), the award-winning film which got a positive reaction at the Tribeca Film Festival, they went back to their hometown in Canada for their next project of their Prog Rock heroes.

Since forming in the late ‘60s, Rush always wanted to do it their way. You can tell that they always wanted to avoid the so-called bullshit of being famous and have fashion written all over them. So let’s cut the cheese and get down to it. Neil has three books, riding his motorcycle in the States and driving in the open road like a ghost rider while Alex Lifeson has a love sponge obsession of hitting a hole in the Golf Course as Geddy has an admiration of Baseball Cards and hitting a home run one day to play for the Toronto Blue Jays. The film interviews not only the musicians that admire Rush, but the fans share their love and how the band remains a huge importance to them.

The movie is played like a double album of the band’s decade in the rise to cult status. Lee and Lifeson become huge stars in the Music Circuit, Neil is the farm equipment kid who replaced the late John Rutsey due to health problems and sugar diabetes (who departed after the debut album). And even though Metallica’s Kirk Hammett, Uriah Heep’s Mick Box, Dream Theater’s Mike Portnoy, Skid Row’s Sebastian Bach, and KISS’s Gene Simmons give kudos and props to a band they have a love and respect, it’s the band’s appearance that is emotional and fun at the same time for fans to share a deep inside of the band’s career.

From the moment we hear the unheard live tracks of Fancy Dancer and Garden Road from an bootlegged live recording in Cleveland and not becoming a dance and moving from the back for the band finished their set as Geddy says in the documentary ,“We bummed out a lot of people on their high school memories”, you can tell that Rush weren’t going for that image. And leaving High School wasn’t the smartest move in the movie, but for them coming from the survivors of the Prison camps in Yugoslavia and Holocaust Survivors as well as Geddy’s father passed away when he was 12 and a young Alex arguing with his family about leaving high school during his senior year, it was tough for them to live in that situation and heaviness, but they wanted to break free of the tough situation and run away from it. You can tell there’s a circle that’s been open and they’re saying, “Here’s something in what you need to know about us.”

If there’s a lot of interesting surprises of the movie, it would be the bonus features on the second disc as if they’re saying to us, “there’s more.” There is never before seen footage of Rush’s original drummer, John Rutsey with the band at the Laura Secord secondary school auditorium in the early ‘70s. John is wearing a glam rock type of outfit as he and the band in the first disc do a raunchy blues metal rocker which has a Led Zeppelin feel. The two numbers on the second DVD features a rare version of Best I Can with John and Geddy on vocals while the roaring 8-minute epic Working Man gets the high school crowd kind of surprised on what they were hearing and knowing that the band were about to be huge. It is one hell of a documentary to enjoy even if you are Rush fan or not. It includes the tragic side of Neil after losing his wife due to breast cancer and her daughter in a car accident and the road trip he took to see where he could find what happened and understanding of the loss one.

This moment in the film took me by surprise of him going on the road to find his true heart. Sending postcards with a different nickname wherever he went to that stretched 55,000 miles. “Travel has always been known as a soothing balm, and even motion, from the time we’re little babies, we want to be rocked and if the baby’s crying, you can take it for a drive in the car and it calms down. That’s the way I described it to myself at that time, I was so stirred up, my little baby soul would only be soothed by motion.” That moment in the film, surprisingly, could understand the pain and the sadness that caught my eye in Neil’s mind.

There is a bit of a sense of humor also in the documentary. Gene Simmons doing an impersonation of Geddy Lee’s high-pitched vocals, heavy metal band UFO making fun of Rush relentlessly during the Farewell To Kings-era when they were opening for them by holding up signs making fun of their songs and a pair of furry slippers on Geddy’s microphone stand nailed beside the mic and calling him, Glee because of the kimonos they wore on the 2112 album back cover. And of course, their first American TV appearance on The Colbert Report with funnyman and part of the Daily Show, Stephen Colbert, who is not just like Rush, but more of the man who can tell that being inducted into the Rock and Roll Hall of Fame is pure bullshit, because the fans themselves, are the hall of fame.
Posted by znathanson at 2:19 PM