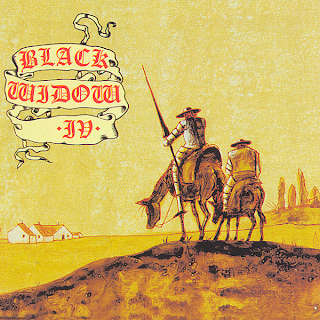 Often confused as being considered for heavy metal pioneers, Black Sabbath, there was no competition in for early doom progressive rock in the mind of Black Widow. Their music wasn’t considered hard rock nor satanic, but the usage of the occult in their music was very spot on however. Formed out of the ashes of Pesky Gee in 1969 after releasing one album Exclamation Mark, adding vocalist Kip Trevor, guitarist John Culley, keyboardist Zoot Taylor, flute and saxophonist Clive Jones, bassist Geoff Griffith, drummer Romeo Challenger, and Rick E on vocals, they created controversy and quite a stir with the newspapers and religious groups protesting the group by holding crosses and pleading with people who felt that they worshipped witchcraft after doing a mock sacrifice on a nude woman during one of their performances that caused an uproar and created a field day for the tabloids to find out what were they thinking.
Black Widow may have been the mixture of Jethro Tull and Black Sabbath, but Black Widow IV, their fourth album, is one of their finest works of their unsung sound and Heavy Prog for an occult matter of subjecting views of dooming music. The album begins with Sleighride, an anti-Christmas 9-minute song of Reindeer sleighing with the band as they turned into a classical piece done by Prokofiev and turned it into a sort of romping sound of holiday melodic rock with a sound that is almost straight out of the Fragile-era of Yes. More Than a Day is an eerie acoustic folk crisp and flute work in the setting of the Renaissance-era of the 15th century; You’re So Wrong is acid folk to the core as if they were paying tribute to the Stand Up-era of Jethro Tull.
The Waves has a mature fantasy Tolkien-esque background as it stays on the edge of darkness with its story-telling lyrics as if they were in the mind of Genesis Seven Stones, but with a dalek Halloween feel to the core with haunting background vocals, ghost-like sounds on the organ along with a dynamic guitar work that makes the piece work perfectly for an epic horror film done by Dario Argento. Part of a New Day, at first it sounds like a crazy groove done by Krautrocker’s Amon Duul II, but then it goes joyous dance piece as if they were paying homage to Italian Prog Rocker’s PFM meets Canterbury kings Caravan and then it becomes very calm-like and with a jazzy flavor to it to have the beat flowing to a new dimension. When Will You Know is a flavor folk 4/4 time signature ballad in the mind of Love’s Arthur Lee and Tim Buckley as well if he had joined Quicksilver Messenger Service and Moby Grape.
Floating is a dreamland rocker as they soar through the heavenly sky. In the piece of all this glory, is an amazing bass line, echoing vocals, wah-wah keyboards and all of this is a roaring number to fly up to the angelic gods to greet them. Pictures in my Head has a mournful beauty atmosphere of looking through the past, present and future while the last number, I See You has a calmness after the storm of dealing to say goodbye to a friend with a psych-soul sound but with an upbeat tempo that is very much a tribute to Linda Hoyle of Affinity fame.
Love ‘em or hate ‘em, the album and Black Widow’s voltage can be inside the new bunch of doom prog rock bands that are following in the footsteps of the genre of the eerie adventures: Astra, Blood Ceremony, and The Devil’s Blood.
Posted by znathanson at 9:57 PM