Supertramp - Crime of the Century 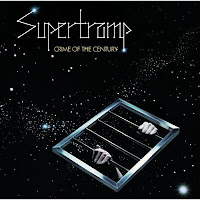 When Supertramp’s third album, Crime of the Century came out in 1974, People began to take notice about them and they knew it was a magnum opus for them and the songwriter duo’s Rick Davies and Roger Hodgson. They were heavily inspired by the Beatlesque take of the British Invasion and the music of what was considered the Prog genre; Traffic, Spooky Tooth, and Jethro Tull. And of course, Crime of the Century had all the ingredients it needed. No wonder Paul McCartney who mentioned Supertramp in a Rolling Stone interview as his “favorite band”.
Formed in 1969 in the streets of London, Supertramp were a band that were desperate to reach high water mark and to be better than the Beatles with Songwriting, Ambition, and the energy of their influences they shared and putting the salute to classical mixed with blues, and heavy darker tones they would do. They started out as a band called the Joints which was helped by a man who came from the Netherlands named Stanley August Misesegaes who was a millionare and fan of rock music, wanted to help a band to get moving and soon he called his buddy singer and keyboardist, Rick Davies to help out.
They soon got bassist and songwriter Roger Hodgson on board after he read an ad in the Melody Maker done by Rick Davies, and found guitarist Richard Palmer and drummer Robert Millar as they were the first slot of the Isle of Wight festival in 1970. Their first two albums; the self-titled debut and the controversial album cover of the late Rusty Skuse who show her glory of her tattoos of Incredibly Stamped, both of those albums flopped. And Richard and Bob left the group to pursue other careers while Rick and Roger stayed put and added new members saxophonist John Helliwell, bassist Dougie Thomson, and percussionist Bob Benberg to the line-up while getting Ken Scott who was famous for working as a producer with; David Bowie, Procol Harum, and Lou Reed, would make one of the most landmark albums in music and the band’s career also. Followed by their previous album, Crime of the Century was their third album – a groundbreaking and dynamic masterpiece which dealt with lonesome, politics, greed, and isolation that was between the core of the manifestations that we all had to deal with from time to time. Davies and Hodgson contributed unbelievable ballads on Hide On Your Shell, If Everyone Was Listening, and the bombastic views of Schizophrenia with a double persona on the eerie classic, Asylum. For any headphones album to take a view of how the disgrace of how the government and classroom treats you like dogshit, though, the other side takes a gigantic leap forward and the ol’ middle finger salute to them. Songs like Bloody Well Right which features some raunchy funk guitar solo done by Hodgson as the hard rock wails some shattering moves with Rick’s angry vocals while John is doing a bluesy solo on the Sax and dealing with the question, Remember the things that you complain about? Well you’re Bloody Well Right about the whole goddamn lot! Rudy is another eerie ballad which has a Jazzy up tempo bossa nova beat while Dreamer is more of a quirky situation on becoming the biggest star in the universe and is more of a reminiscent of Elton John. And the finale title track is giving the Government’s run for their money in this symphonic prog quartet feel in this 5-minute ballad which has a Pink Floyd meets The Moody Blues in an orchestral way.
Still to this day, Crime of the Century remains one of the albums that would have been the prog version of Coldplay in the ‘70s, it is unlike any other album that you’ll hear again in the past, present, and future and their triumphant landmark breakthrough.
Posted by znathanson at 10:31 PM

i worked with supertramp as part of mismanagement from the crime to famous last words period. i find your comparison to coldplay spot on. when i saw coldplay perform in manahattan at radio city music hall i was overwhelmed by the comparisons. i'm glad you wrote these words so many years after crime was made, we too felt it was unique.
charly prevost